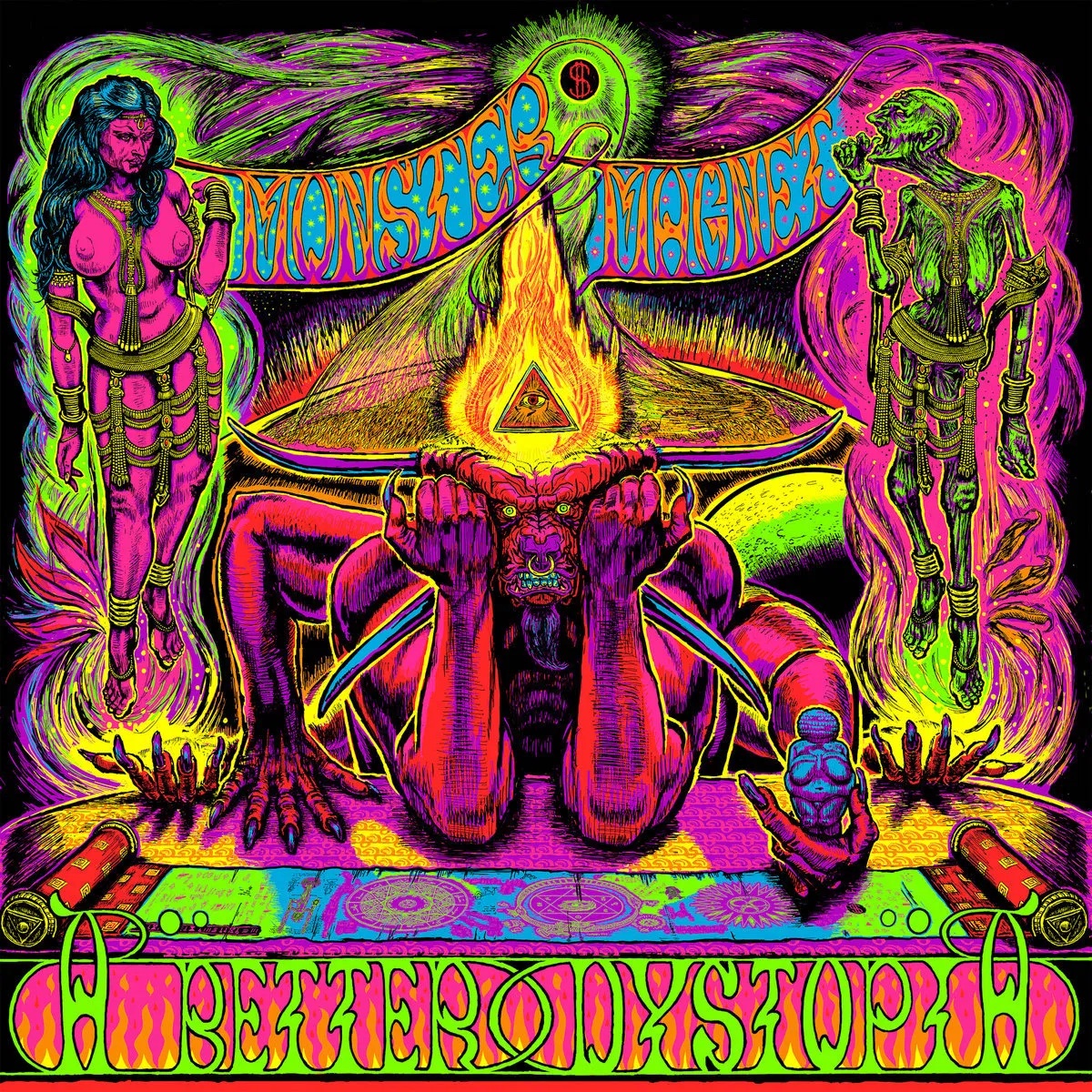 Recording cover songs was for decades a rare occasion, but then with rise of digital music platforms and social media it seems that there isn’t a song out there that hasn’t been covered in just about any genre imaginable. Established artist have jumped on the trend as well releasing singles, EP’s and even full albums consisting of covers. When it comes to them it’s often used to maintain the interest of the fans in between releases, because interest span of the general music audience is getting shorter.

Despite the sheer volume of cover songs out there skyrocketing, the number of good and interesting covers out there has not grown exponentially.

Yet here we are in 2021 with the band who is celebrating three decades since the release of their debut, by releasing a covers album. And while it might seem bit odd, even for a band who regularly featured cover songs on their albums, when it comes to A Better Dystopia it’s a cover album unlike most of them.

Monster Magnet digs deep into obscure tunes which inspired them to form this band. At the same time the band presents the music that still serves as this band’s inspiration. As such the album differs from many similar releases that often serve as a collection of covers songs, which are most likely to get lots of clicks on YouTube.

All this gives the album additional strength and taking into the consideration that Monster Magnet has been riding a wave of newfound hunger and creativity for past decade or so, means that this album is something to get excited about.

As mentioned above this album digs deep into band’s early inspirations, but it also points out the direction of band’s last coupler of albums. Band, which these days only features one original member Dave Wyndorf has been through it all, with psychedelic starts, major breakthrough, rather banging breakdown and triumphant return with two albums that characterized by newfound energy, creativity and staggeringly high quality. 2013’s Last Patrol was more of an atmospheric, psychedelic affair, while 2018 Mindfucker, was no-frill rocker. At the same time both were undeniably Monster Magnet and A Better Dystopia‘s approach is pretty much the mixture of the two, with noticeably more accent on the latter.

The album opens by the only original song, which is actually an intro, with Wyndorf preaching as only few can. I mean, how descriptive of what is about to come is opening the album with lines:

“Slide with me, now, down that purple shaft into the deep, inner depths of the diamond mine Where we will witness the flight of the precious peanut butter fudge angel of love as she spreads her wings and flies As she spreads her wings and flies high through the thundering silence of your vacuum-kept secret Hiding out on the pulsating fringe of your bubbly, fudge mind”.

And off we go…

What follows is such a bubbly energetic rock experience, with loads of straight-forward energy with depth and weirdness to match. After the intense intro the band punches onto Hawkwinds “Born To Go!” capitalizing on its simple repetitive riff and adding just enough layers of subtle spice in order to make song roll even better. The same goes for next couple of songs, while they dig deeper in form of Pentagram’s “Be Forewarned”. Elsewhere the band slows things down on chillingly gorgeous cover of Pretty Things’ “Death” and they go rather epic on another one of highlights of the album Dust’s “Learning to Die”.

There is so much quality of this album that manages to do a covers album justice, while at the same time paying homage and underlining their current form. There are depths on the album that result in some of the strongest moments of this album, but it’s the outrageously fun, colourful and simply banging moments that dominate. They are delivered with respect and cocky conviction to the bone.

The importance of this release and all its important messages and nuances might fly way over the head of many, especially those who find the idea of “shuffle”- function on their streaming platform to be the coolest thing ever. For the rest of us this is an album that celebrates the art of playing music, being inspired, and creating. How about that, anno 2021 from a band who’s been around for over three decades?