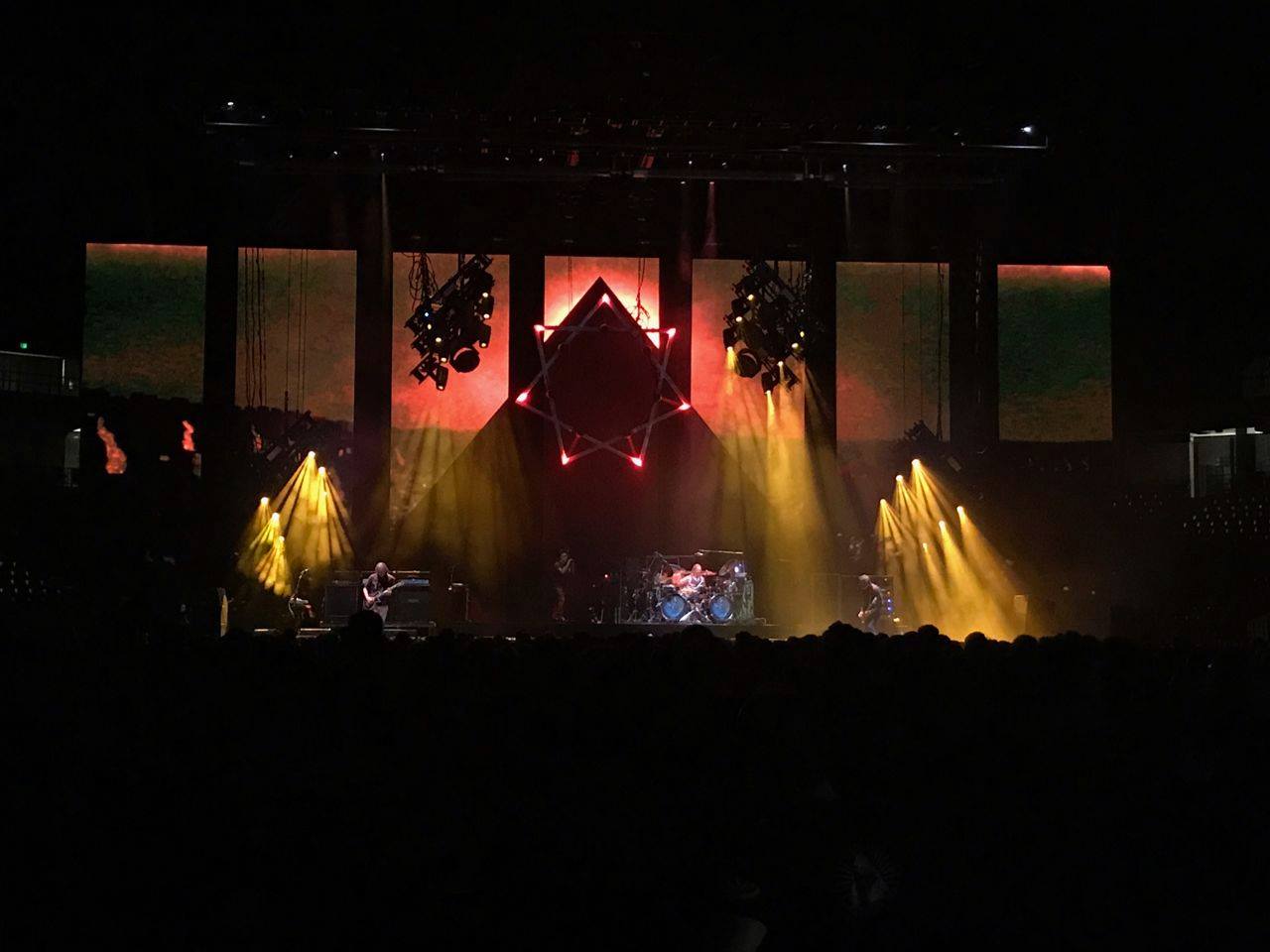 One of the most demanded live acts was a perfect booking for Copenhell’s tenth anniversary. The band rarely comes to Europe anymore and their last performance on Danish soil was in 2006 when they played a “life-altering” show at Roskilde Festival. The band is now on world tour and they have announced the release of their first new album in 13 years for 30th august. But knowing band’s tendency to basically fuck around with people time will tell if the date revealed before one of their US shows is indeed date for the release of Tool’s new album.

One of the most important progressive bands of past quarter of a century was set to play at 10:30 PM and be it that we are in Denmark, that means that it’s still fairly bright outside. And if you are familiar with Tool, you know they like their stage dark, nonetheless the singer Maynard James Keenan, who prefers to be placed in the back of the stage without a single spotlight in him. Something he also practices with his other band A Perfect Circle who played Scandinavia last year.

But by the time the band took the stage it was dark enough to keep in like with that mysticism that is part of Tool.
They opened with “Ænema”, which, who knew, is a perfect opener, from the Maynard James Keenan’s sighs in the beginning of the song, over massive chorus and infectious mid-section to the epic intense finale, the song served as flawless introduction to this highly anticipated return of Tool.

And from then on Tool managed to do that, which so many fail at – they managed to grab the audience’s attention and pull them into their world, while at the same time maintaining extremely anonymous. Keenan, of course, the silhouette that he is kept in the back the entire show and the remaining members of the band rarely even looked at the crowd. Yet their performance, the quality of the material and the visual aspects all working together resulted in an immersive experience on the level few can achieve.

Experiencing Tool live is a 360-experience triggering many of one’s senses and doing this by focusing on performance instead of working the crowd. The interplay between visuals, the music and intensity of the performance served the greater whole and it’s easy to find yourself not even noticing the outworldly skill of these four gentlemen. The skill is mandatory, but it’s what arises when these men play together that is one of the reasons why this band manages to sell-out massive arenas wherever they play even thou they didn’t release new music in 13 years. Taken their anonymous approach and nature of the music it might be hard to comprehend how in the world they’ve managed to achieve and maintain such commercial success. With that they resemble Pink Floyd who’s uniqueness and unorthodox approach didn’t stand in their way, but was perhaps the reason for the legendary status and commercial success.

During the 90-minute long show the band played two new songs and while experiencing new music from Tool might be better in form of final studio recording the new songs are promising. They acquire all the trademarks of the atmosphere, complexity and intensity that we have grown custom to when it comes to Tool and in general, they gelled very well with the classics form the setlist. Playing new unreleased songs does result in slight drop of the crowd involvement, but Tool pulled it off and also cleverly placed “Schism” in-between the two new songs.

Sonically, there were some issues with bass and for the major part of the show the drums and bass were too dominant often putting the vocals and even guitar too far back. This robbed the performance of some of its clarity and nonetheless those outstanding melodies.

And speaking of melodies, in the past Keenan has proven not only to be able to write and deliver some outstanding melodies, but he has also often managed to do the unthinkable and alter melodies of own songs (“Pushit” from live album Salival) and even other people’s songs (John Lennon’s “Imagine”) and last night was not exception. The slight melodic changes during the likes “Ænema” and “Forty Six & 2” perhaps made them even better and for sure added to the vitality of the live performance of these songs. Elsewhere in “Vicarious”, unfortunately he still doesn’t sing first few lines during the otherwise so crucial climax of the song.

Finale of the show was a pure tour de force in form of “Forty Six & 2”, “Vicarious” and “Stinkfist”, which cemented the power and uniqueness of this band. Few years back Primus stunned the somewhat unprepared Copenhell crowd with their show, this time everyone was ready, but perhaps just as stunned by what music can do live.