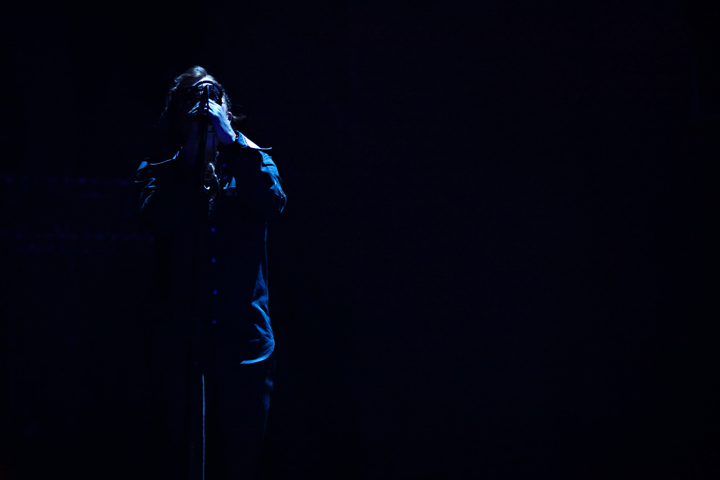 This year saw A Perfect Circle release Eat The Elephant, their first album of all new songs in almost 15 years. The band is following the album release with a tour and this time also paying more attention to Europe as well. For the big part their European run consists of festival shows, but there are also some headlining arena shows. One of them was last night in Swedish capitol Stockholm, where they played sold-out show at Fryshuset.

At festivals, the band has hard time enforcing their complete cell-phone ban, but it was surprising to witness relatively few people use the cell phones at their last year’s festival gig at Aftershock Festival in Sacramento, CA. Last night, however, the ban was full-on and on a personal level that was good news all the way through.

The ban was announced in an email few days prior of the show and at the venue with countless informative posters as well as with three consecutive announcements via the PA right before the show start. And the crowd obeyed the rules. Some out of respect, some out of fear of being evicted from the show and some just because they were looking forward to an more intense and intimate live experience.

Regardless the reason some 3.000 strong crowd were in for an experience out of the ordinary.

The band opened with first two songs from the new album and despite them not being the most logical live show openers, they worked eminently. Doing the less logical and making it work is one of those things that make this band so unique.
If you’ve followed Maynard James Keenan’s career then you also know that when performing live, the singer, keeps in the back with no spotlights on him at any time. It’s hard do pinpoint why it works, silhouette frontman in the back of the stage works, but it simply does work for A Perfect Circle just as well as it does when he’s performing with Tool.

The somewhat illogical opening not only worked, but it also displayed the live quality of the new material. They followed it with couple of upbeat live classics “The Hollow” and “Weak and Powerless”, which seriously broke out Billy Howerdel’s distorted guitars.

Common for the first five songs of the show was that, which was common for the last night’s show; diversity, brilliant sound, simple yet extremely suiting visuals and a performance that was not only technically superb, but just as importantly filled with warmth.

A Perfect Circle delivered a show that displayed band’s diverse sides, which in return gave a highly vibrant show. The setlist was combined perfectly further adding to the vitality, while at the same time maintain the generic overall feel.

The band’s latest album might not be their finest, but besides being a very good album, experiencing those songs live proved their quality and added more energy and vitality to the likes of “TalkTalk”, “The Contrarian” and “The Doomed” proved to stand shoulder to shoulder with the classics.

On the down the otherwise great sounding band, had couple of issues with some sound outlets between songs as well as some flow issues in when going from first chorus into the second verse of “Disillusioned”.
There were also some issues with the venue, which doesn’t seem suitable for the big concerts like this, mostly due to issues with ventilation and toilet and bar facilities.

The closing of the show offered more diversity and a four-song finale, which was very representative of what this band is all about.

With more than 700 concerts under my belt, it rarely happens that I get goose bumps at the live show, but last night I had actual goose bumps for what seems like a third of the show. This, not only, proves the quality of this band’s music and live performance, but the greater big that reveals itself when all the aspects of A Perfect Circle seamlessly harmonize.