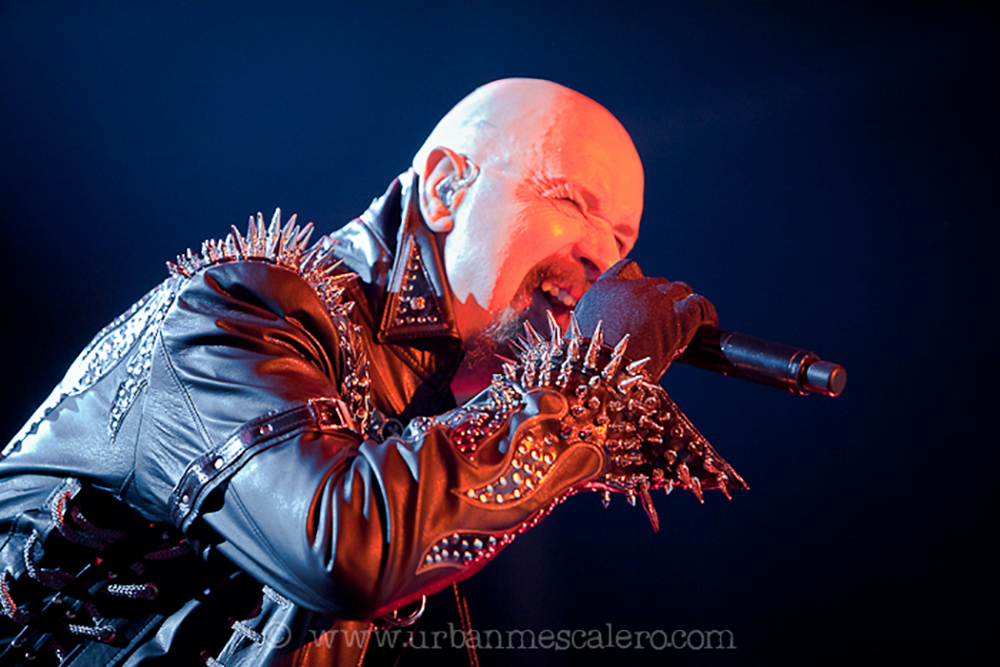 To begin with it seemed somehow odd that metal legends Judas Priest were set to play Royal Arena with capacity of 16.000 seat, even thou tickets for the upper balconies were not on sale. Can they really come close to selling 10.000 tickers in Copenhagen? Avanged Sevenfold came very close to packing thw place last year and if Judas Priest would manage to do the same it would be especially thanks to two aspects. One is that they have taken Megadeth on tour with them, and the other is that their latest album Firepower is arguably their finest release since the 1990 masterpiece Painkiller. On top of it all few months ago one of band’s founding members, Glenn Tipton has revealed that he’s suffering from Parkinson’s disease, which has kept him from touring the new album. This has steered some rumors that that this could be one of the last chances for seeing the band live.

Megadeth took the stage at exactly 8 PM, with what has over the past few years proven to be a perfect show opener, the classic “Hangar 18”. Who knew?!

Unfortunately, the sound was extremely poor, with bass and drums all the way in the front and Mustaine’s vocals almost non-existent. The colossal sound issues were never really fixed, so the hour the band had on stage felt like a drum-and-bass instrumental version of Megadeth, with occasional mumbling and mouse-like squeaks from Mustaine’s side. To top it all the sound level was way too low, which further weakened the experience. The low level and adsence of vocals also resulted and something as embarrassing as portion of the crowd singing Metallica’s “The Four Horsemen” chorus during “Mechanix”.

Current Megadeth line-up is their finest since the classic Mustaine-Ellefson-Friedman-Menza era, but you wouldn’t know that based on the last nigh’s gig, even thou the band played well and Kiko Loureiro and Dirk Verbeuren are such a breath of fresh air. But neither that nor the fact that crowd-pleasing set-list that only included two younger than twenty years could drag this show from the gutter. Too bad, especially knowing that this band can play one hell of a show, even when they are not the headliners.

Mustaine thanked the crowd with the obligatory “You’ve been great, we’ve been Megadeth” – and oddly none of the two statements felt completely accurate.

One couldn’t help, but worry if the same curse will hit the headliners, but some half an hour later, as the giant curtain in front of the stage dropped and metal legends from West Bromwich blasted onto the stage, it was clear that Megadeth-syndrome was just that – Megadeth-syndrome.

Already during the opener, title track from the new album, it was clear that the crowd was in for a whole another experience. Megadeth might be the legends in their own right, but last night’s issues aside, they were still “just a support band”.
Stage production for Judas Priest was on whole another scale. The visuals and the lights were fairly simple, yet extremely effective. Most of the visuals were based around fire and variations on the theme, and while not all were equally effective, they served the show extremely well and gave it that grand feel that is so important for the huge arena shows.

And talking about the arena the 10.000 seat capacity was far from packed, but some 7.000 people found their way to Royal Arena, which is still more than yours trully expected. Not only that, but they were engaged and they knew their Priest, even during the several deep cuts and the three new songs, which were received overwhelmingly positive.

The news about Glenn Tipton not taking a part on this tour was met with disappointment, rather than skepticism. On stage, he was replaced by the band’s producer Andy Sneap, who did a very good job. Richie Faulkner, who has replaced the second guitarist and founding member K. K. Downing seven years ago, has since found much more confidence and has become one of the key figures of the live show. He is the member who has most connection with the crowd and his somewhat flashy appearance balanced out some of the more anonymous stage presences by Scott Travis and Ian Hill.

The Metal God himself, Rob Halford impressed, yet again. It goes without saying that his vocals are not what they used to be, but taking into consideration that he has been screaming his balls off for close to five decades, it’s utterly impressive that he can still do the songs from the entire career, justice. He was helped along the way, by fair dosage of effects and volume level that was often too high.

The encore opened with one of the highlights from the new album, “Rising from Ruins” and was followed by the crowd-pleaseer trio of “Metal Gods”, “Breaking the Law” and “Living After Midnight”, which saw Tipton join the band on stage. These kinds of situations often come across as pitiful, but in case of Tipton the enormous respect outweighed the guitarist’s clearly weakened presence and the gloom of the whole situation.

With well over four decades behind them, Judas Priest has delivered an extremely strong record and against the odds a really potent live show. Taking the weight of the current situation into consideration, perhaps it would be a good time for the band to call it a day, once this tour wraps up sometime next year.