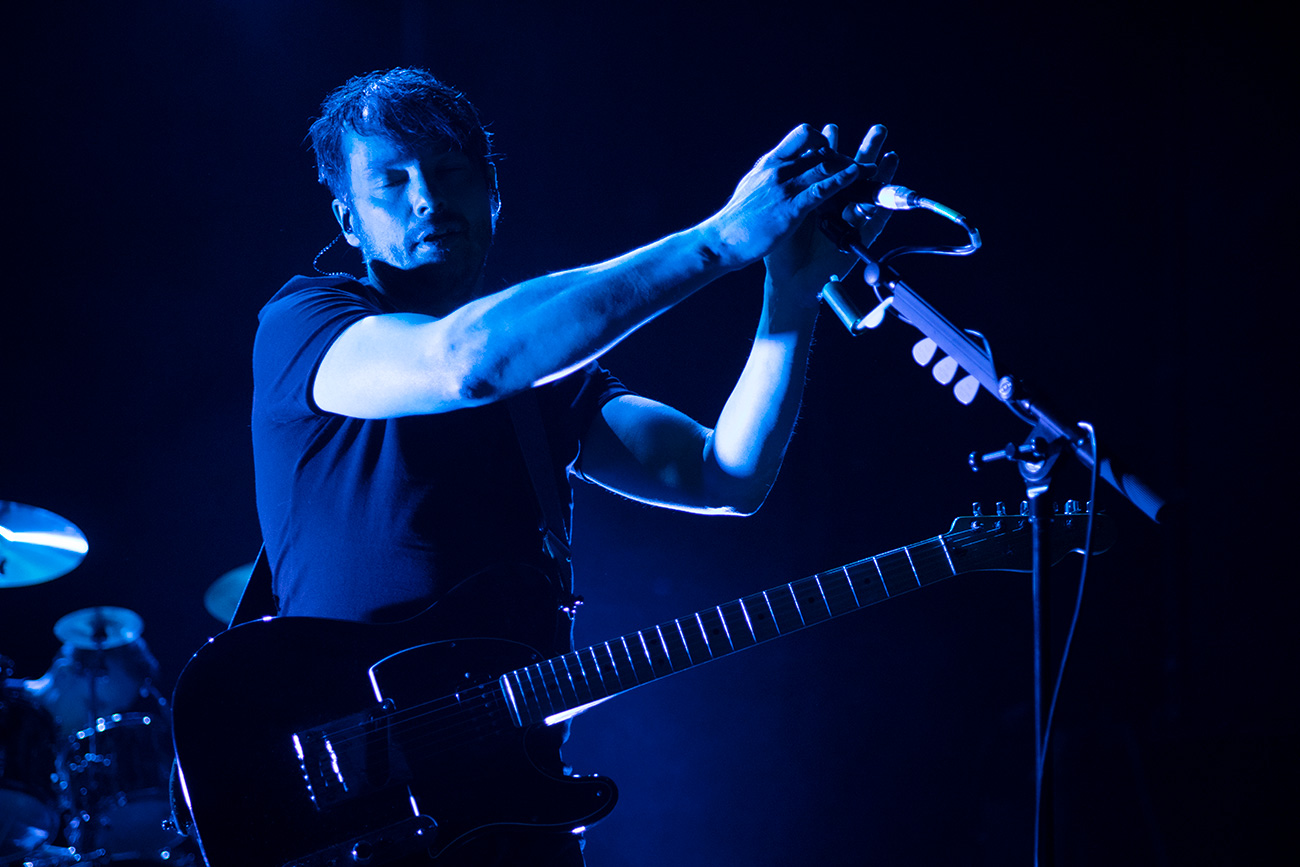 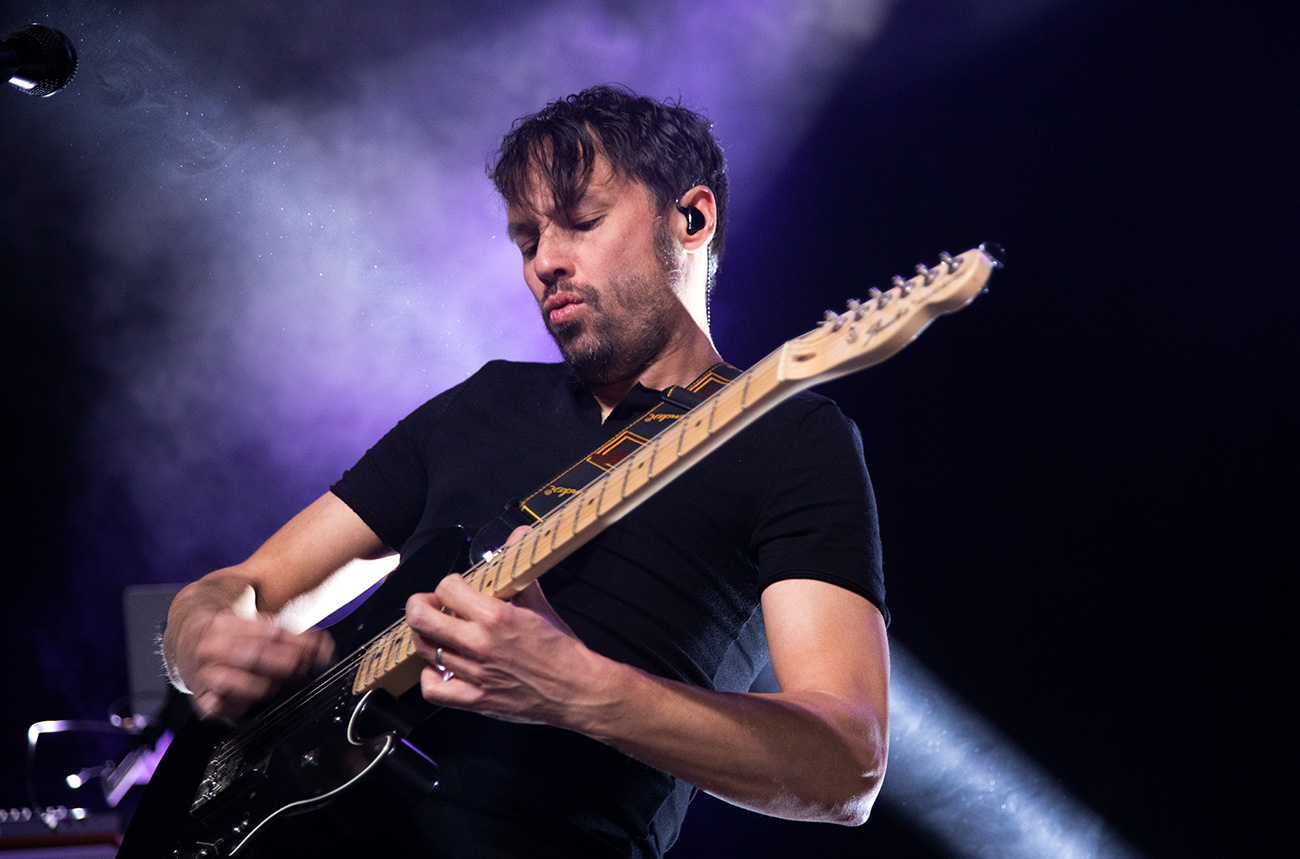 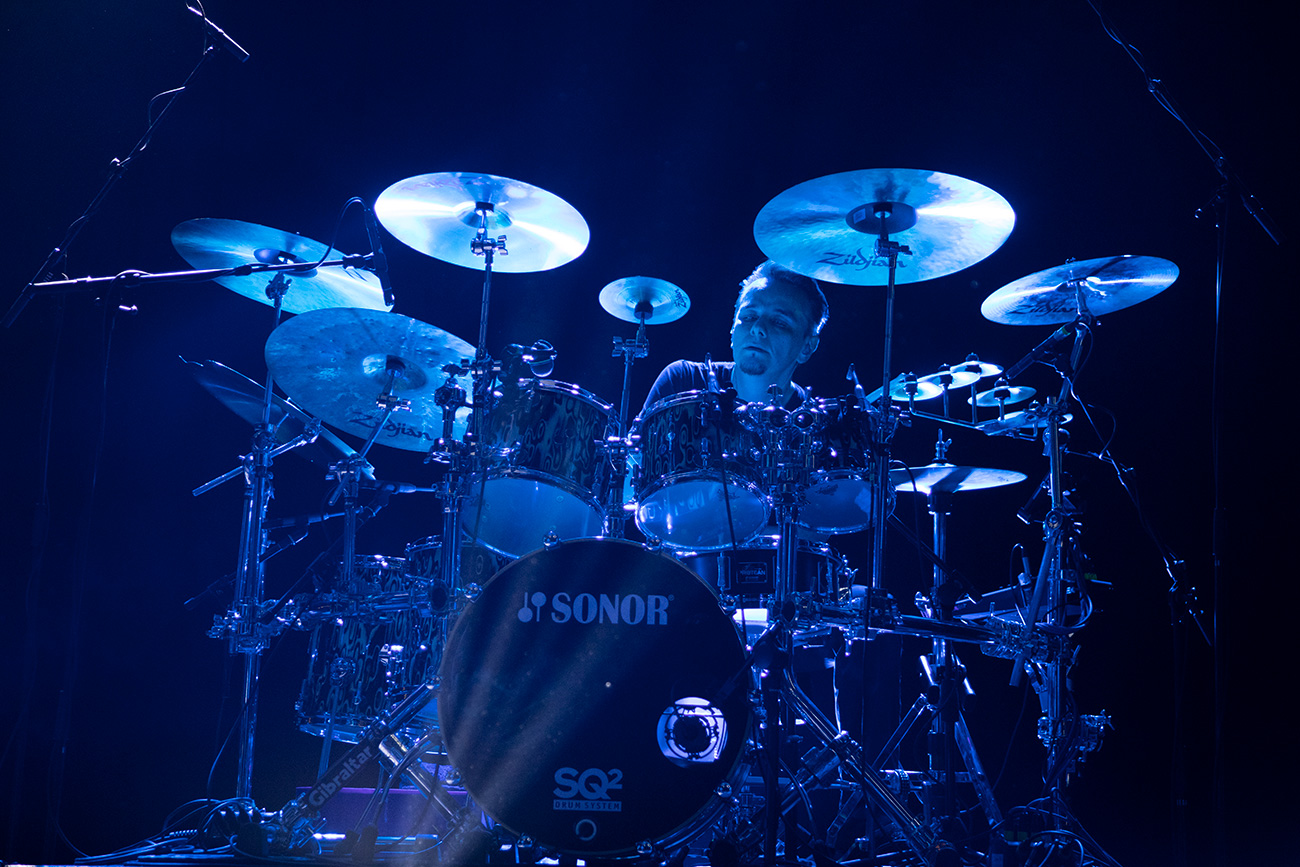 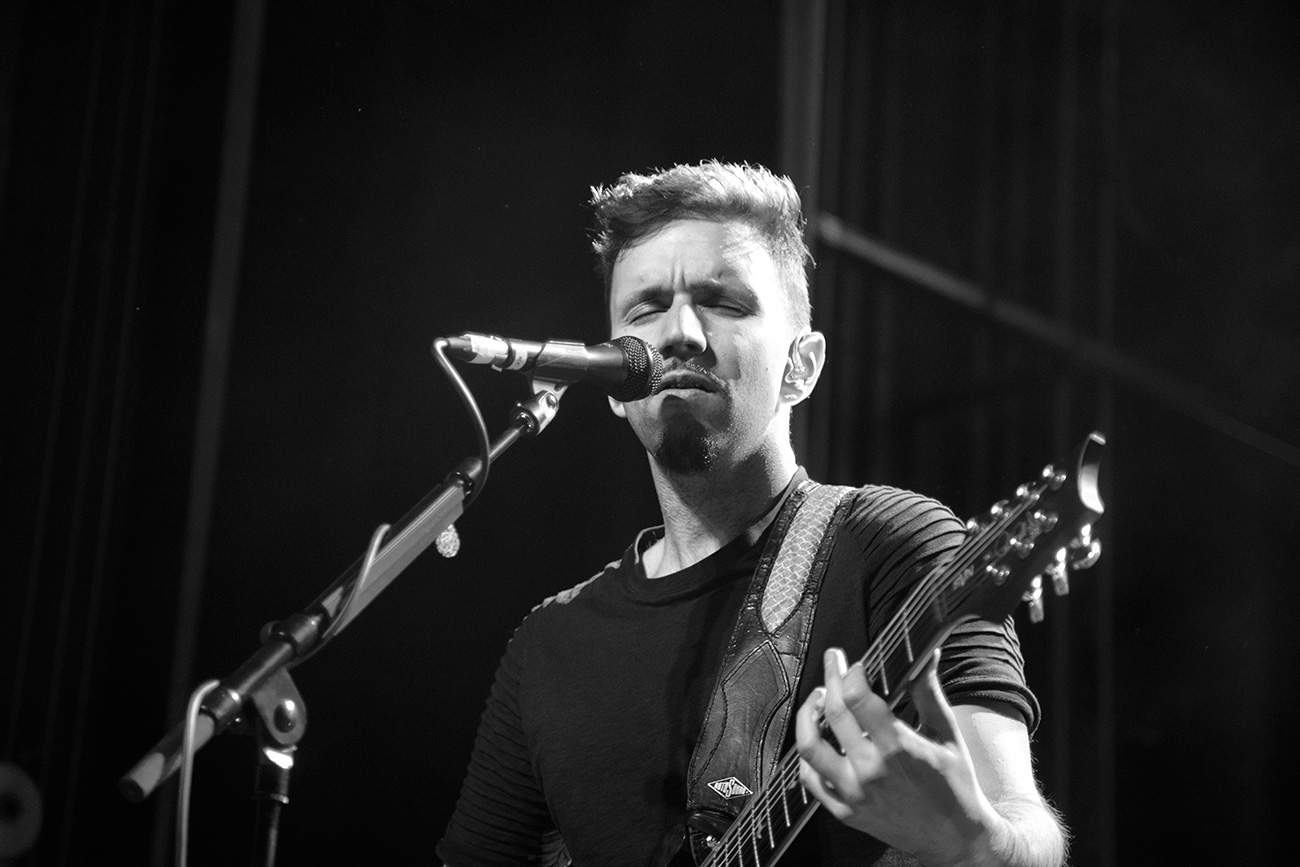 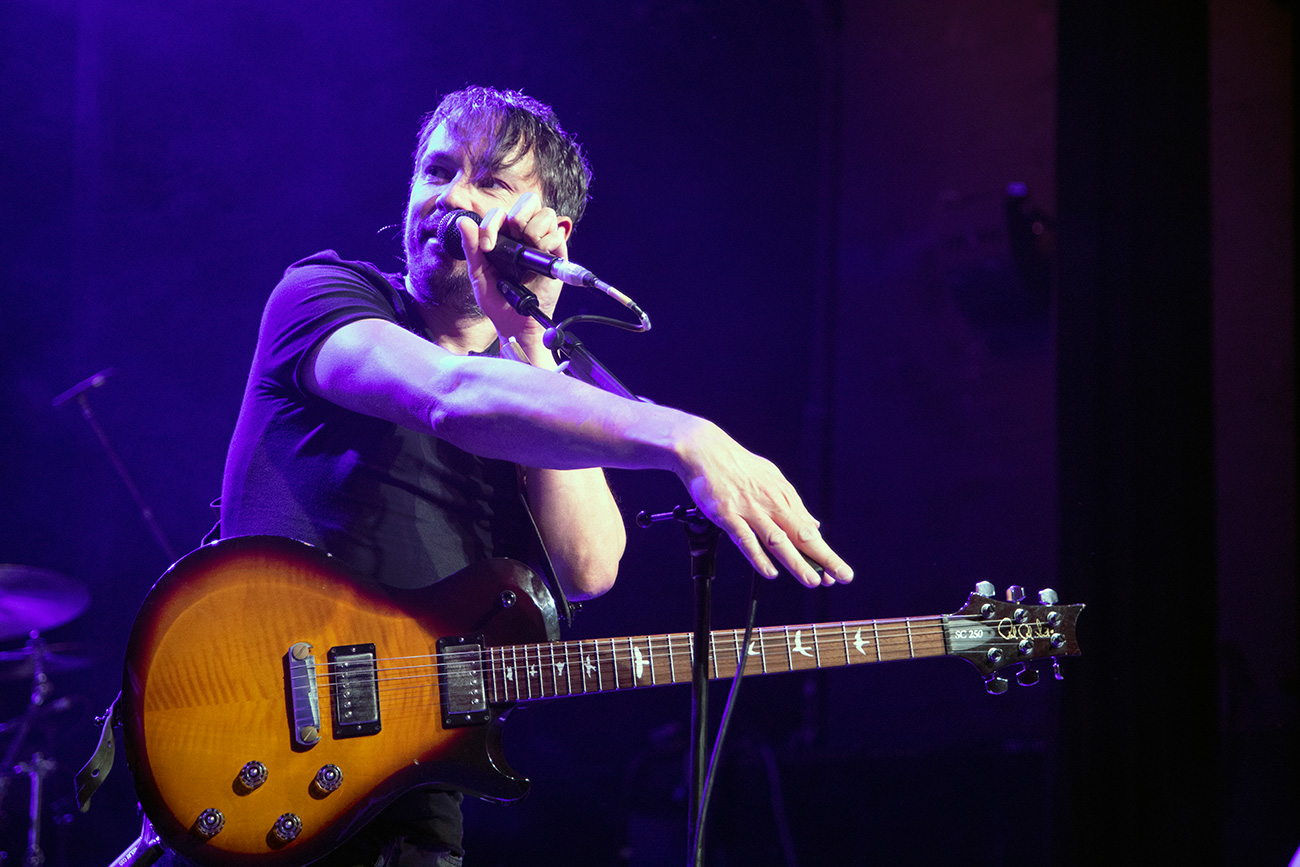 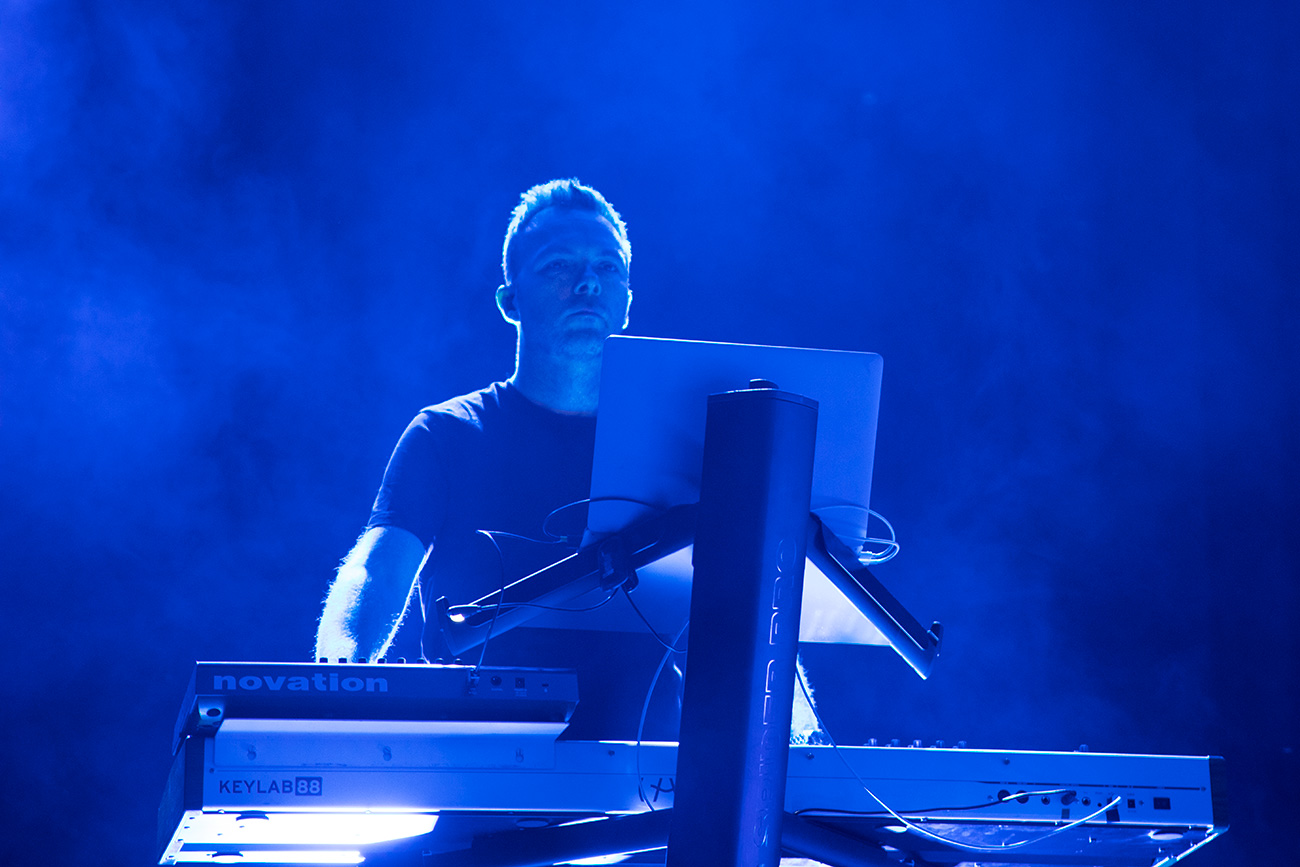 The concert was booked for Vega’s small venue with capacity of 500, but when it was sold out, the promoter moved it to the Vega’s big venue. Unfortunately, the band came nowhere near to packing the 1500 seat venue, which resulted in the balconies being closed off, while there was ok place to move about on the floor. Still almost 1000 people is more than expected for the band’s very first concert ever in Copenhagen. Truth be told, the big reason for a nice turnout was Harrison’s involvement with band’s last two albums as well as the fact that this time around he was touring with the band.

O.R.k kicked of their short set somewhat anonymously, cramped on a rather small portion of the stage, but off the bat it was evident that we have to do with some extremely competent gentlemen. It’s sort of given, from experienced gentlemen like Mastelotto and Edwin, but the biggest impression this evening came in form of vocalist/keyboardist Lorenzo Esposito Fornasari, who was a true revelation for those unfamiliar with his/band’s work. He might not be a natural frontman, but his vocal performance is truly staggering. He was in total control of his impressive vocal range, yet at the same time emotional and immersive.

The band sounded quite good, but there were some oscillations in the sound and balance between the instruments. Edwin’s bass got pushed back for noticeable portions of the show, which took out some of the dynamics from the performance.

In general, the band did good and as the concert progressed O.R.k built more firmly take grip of the audience’s interest. The whole thing culminated in a grand finale with Fornasari stepping in front to his keyboard to deliver a truly mesmerizing operatic vocal

The main band of the evening took the stage in a very undramatic matter and ripped into “Far Below”. Off the bat the sound was clear and masterfully balanced. They kept the momentum by continuing with “Exile” and “Alone At Sea”. A big drop in the flow accrued shortly after, when Bruce Soord’s guitar malfunctioned, right after he announced the next song. It took the tech a while to fix the problem and it felt perhaps even longer because The Pineapple Thief are not exactly entertainers. At some point he even asked the crowd what they should do in the meantime, a question he possibly came to regret right after, because the response from the crowd was prompt “Drum solo!” It was also repeated several times from different places in the crowd. But no drum solo for all the drum enthusiast who arguably wouldn’t even shown up this evening had it not been for Harrison.

Eventually they did get to play “Threatening War” and while the technical issues might have spoiled the flow and the announcement of the song, the performance of this highlight off of the new album Dissolution was nothing short of glorious.

The Pineapple Thief are not entertainers in typical sense of the word, and they don’t really work the crowd, but as the concert progressed the mixture of emotional songs and tight performance resulted in band getting closer to the crowd.

And then there was Harrison. There is no going around it, there was lots of focus on him. And rightfully so. His skill, creativity, rhythmic and melodic understanding is simply outstanding and treat to experience live for any drummer of any genre imaginable. The rest of the band did a great job as well, with “hired gun” George Marios really marking his presence with razor sharp tone and just as sharp guitar leads. Jon Sykes on bass was immersed and groovy as hell, but it would be good if Steve Kitch showed any emotion during the 100 minutes long show.

“3000 Days” was bit misplaced, but it was good to hear it sounding better than on the original recording. If “Shed a Light” was beautiful then “That Shore” was gut-wrenchingly beautiful. Doing the whole “This is our last song” thing before the encore was unnecessary, but the encore itself was spot on, with exception of the closing song. It was good that they played “Snowdrops”, but they should’ve placed it elsewhere in the setlist and just closed the show with “Not Naming Any Names” and “The Final Thing On My Mind”, because they were simply flawless buildup and execution of a concert finale.

Copenhagen crowd got their prog last night. On many levels, that is. They got the taste of Porcupine Tree, the band that they miss so much despite Steven Wilson’s outstanding solo career. They got some good old prog and nonetheless they god a serious taste of The Pineapple Thief that much like this evening is an extremely solid prog entity, with references spanning over some five decades. During the course of bit more over a month Copenhagen will be exposed to Steven Wilson, Riverside, The Neal Morse Band and The Pineapple Thief, which makes this great period for prog fans in Copenhagen. The Pineapple Thief don’t feel like outsiders in this prominent company.