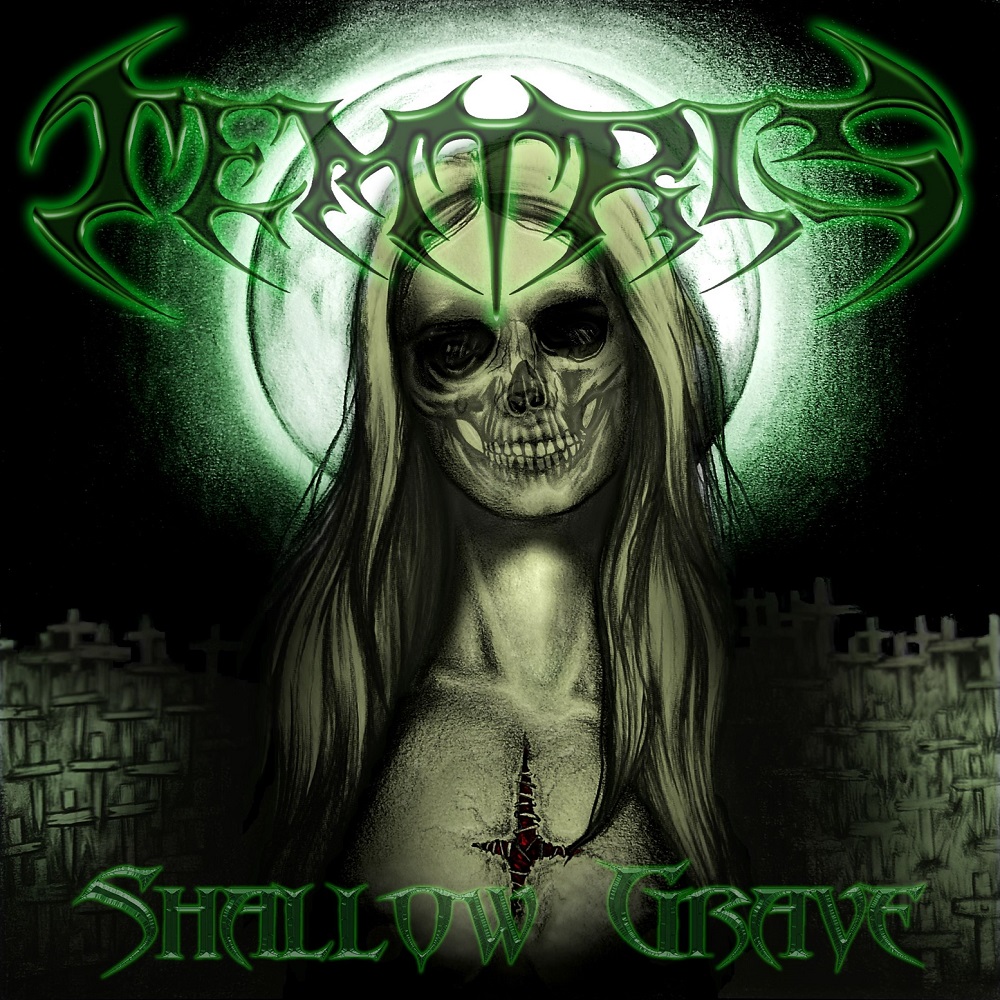 Temtris has, over the span of their near-twenty year career been known by quite a few names; They started out as Labyrinth and then Labyrinthia before finally settling on their current moniker. Ignoring the names for the time being and instead focusing upon what they have released so far will reveal a grand total of one Demo and four Full-length albums. The third of which is the one I will be rambling on about today, and carries the title Shallow Grave. Overall the five Australians aspire to be a Heavy Metal band, which is evident both in the way that the music is built, progresses and, most noticeably, in the powerfully high vocals of Temtris’ main female vocalist. In order to add another dimension to the music (or more depth; Whichever term you perfer, one of the guitarists supports the lead vocalist in several passages, adding a deep, heavily Death Metal inspired growl to the mix. This results in a very melodic Heavy Metal sound with a menacing underbelly that truly shines in the encores on more or less all eight tracks present on Shallow Grave. Now, the band was formed in the last year of the last millenium, and this has clearly had an impact upon the sound of the band; Temtris is clearly a product of the time during which it was incepted, with the music emphasising simple and fast, yet catchy rhythms during the majority of their tracks (such as the title track and the track ”Slave to the System”), as well as the occasional slow´, almost ballad-like performance (as found upon the aptly titled ”Silent Tears”). What makes Temtris stand out as a band, the way I see it, is the blend between the high-pitched female lead vocals, and the underlying male growls that support it. This is not at all unheard of; However, rarely do I see it work as well as here. The two vocalists do not fight for dominance as can sometimes be the case (and even work as an advantage if used correctly); Instead, the growls are reduced to being a mere instrument, instead being used to add depth and power to the lead vocals, not unlike the function a Bass plays in a band such as this. This is most clearly seen in the ballad on Shallow Grave, the track entitled ”Silent Tears” – Which also happens to be my favourite track on this record. But then again, I have always been partial to the melancholic and the slow and relentless. It does well to show off what the band is capable off, but does not encapsulate the experience one would have if one were to attend a Temtris concert. I therefore instead link to the track ”Your Time Has Come”, since it more precisely depict what the band will deliver when seen live (and given the chance, is that not the best way to enjoy a Heavy Metal band?) As an added bonus, Temtris has been kind enough to release a music video for this track, which is can be found below.

Recommended for fans of Hammerfall, U.D.O, Accept (both Udo era and afterwards) and Manowar, to a lesser extent.