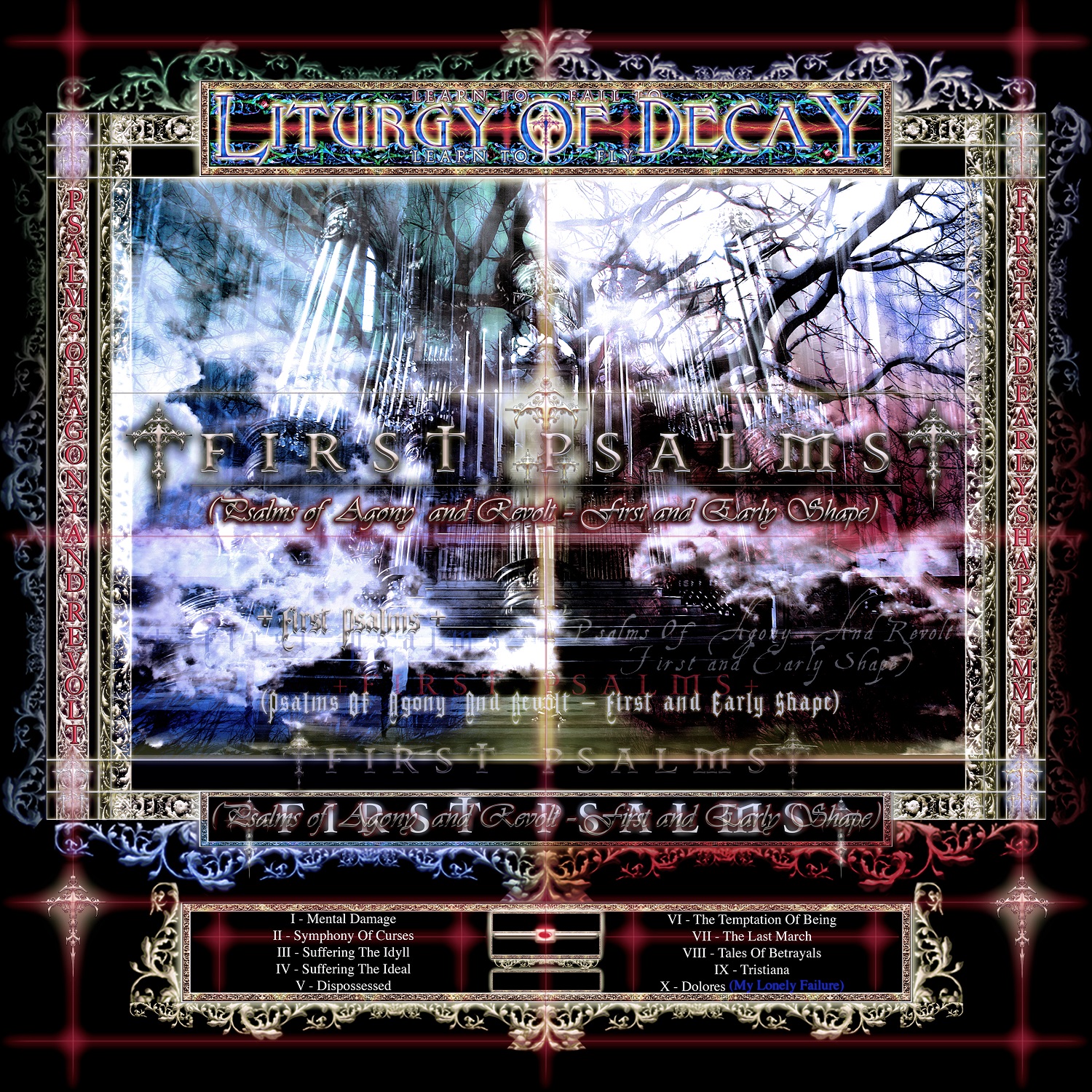 In the case of bands such as French Liturgy of Decay, I find it useful to break the information down into numbers, and then go about crunching them. This might sound a bit peculiar, but please bear with me. Now, for the time being, Liturgy of Decay is a one man band, one that in the middle of last month could celebrate the release of their first full-length album (one that has been twenty-one years in the making, considering the fact that the bands previous EP and Demo is included within). Staying within the number-crunching mindset, I can add that the ten tracks present upon First Psalms average in length from five to nearly nine minutes, adding up to a running total of fifty-five minutes. And now, moving on to the musical aspect, I can mention that Liturgy of Decay is something as rare (for unknown reasons) as a Gothic Metal band with exceptionally strong religious, melancholic and almost theatrical influences and themes. This may sound like, and perhaps even was, a bit overwhelming, but as it turns out it was a quite unique and well-functioning combination of themes and instruments. The sole present member of the band has himself admitted to being strongly influenced by Gothic Rock acts such as The Cure and Sisters of Mercy as well as more traditional symphonic Metal bands such as Paradise Lost, but personally I also get a hint of the Gregorian feel that made Meatloaf rise to prominence forty years ago. Musically, First Psalms carry many of the hall-marks of the Gothic Metal genre; What makes them stand out is the heavy use of church organs and synthesizers to create the church-like, partially religous feel that seem to permeade the entire album. This also supports the vocal tracks quite well, which especially has its focus upon the almost theatrical or even operatic dramatic tension with its clear vocals (this is the part that, for me, seems inspired by Meatloaf). Sure, I highly doubt that any church that I know of would be willing to play Liturgy of Decay during any of their sermons – After all, the lyrics themselves are not exactly religious per se – But the overall feel and tension created through the bands performance definitely draw several parallels to the epic, supernatural feel often portrayed within churches, in movies at least.

While I seem to have been praising this album quite extensively, I still feel obligated to mention the most important criteria, for me at least: While First Psalms is most definitely, at its core, a Gothic Metal album, the strong religious and near-operatic overtones and melodies make Liturgy of Decay quite unique and unlike any other band that I can think of. The track ”Tristiana” proves this quite well, and I recommend giving it a spin on the button below. If nothing else, I am fairly sure that you will have heard and experienced something new and hopefully interesting.