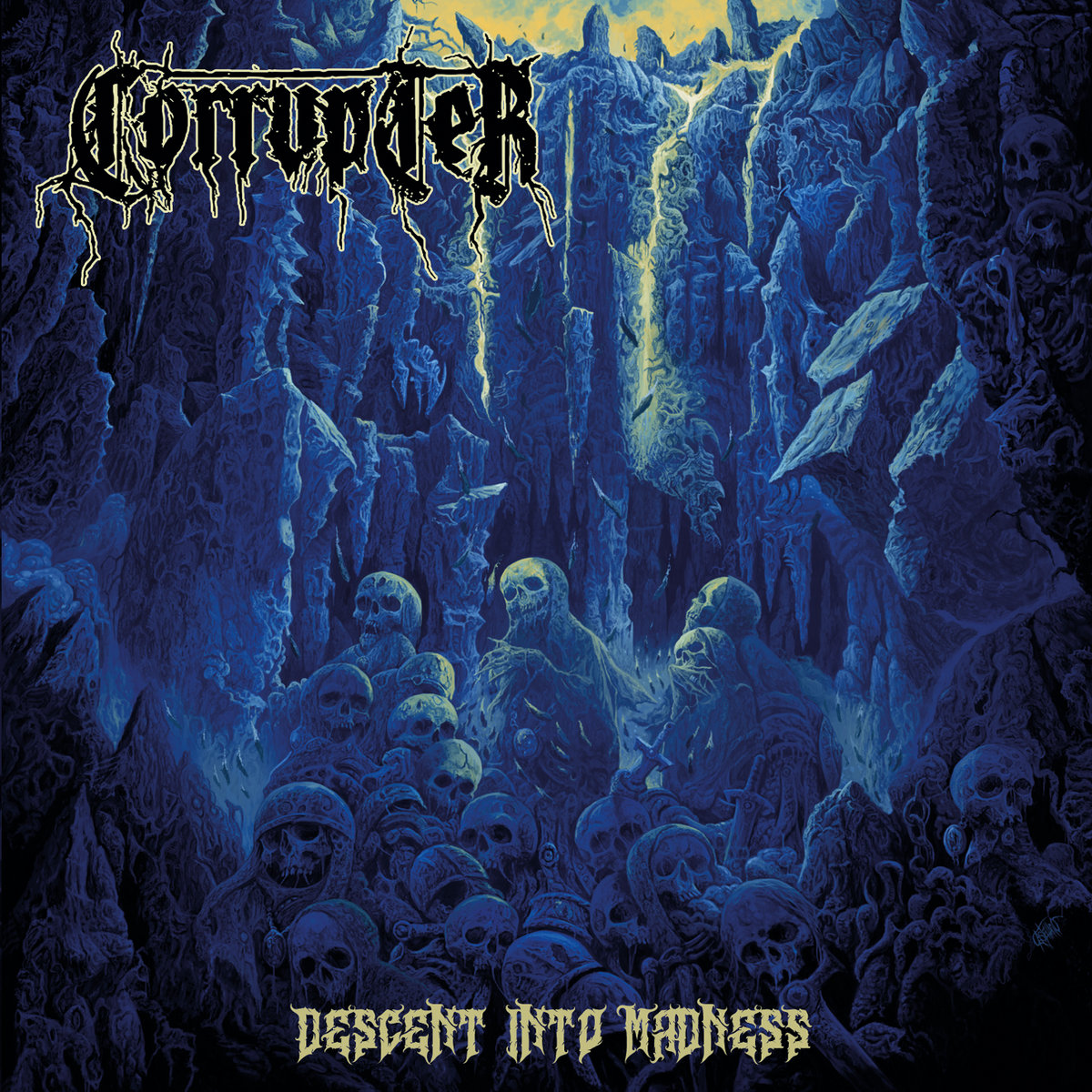 Godz Ov War Productions from Poland never disappoints! This time they’ve released a very powerful and stunning new album from a French duo going under the moniker of Corrupter. Descent Into Madness is their full-length debut contaning nine visceral and brutal tracks done in the good old-school manner. It’s a rather brutal mix of death and black metal, powerful and old-school to the core. Having said that, there’re many tempo shifts and variation on this record. Thus, in each of the songs have those ‘silent’ moments, so it’s not all about a share bonecrushing brutality. It’s perfectly exemplified with the second song called “Darkest Light”, which has this morbid and slow-paced tempo in order to create contrast to those predominantly fast moments.

My album highlights are namely “Not Enough to Harm”, “A Mistaken Anointing of the Sick” and the closing self-titled one “Descent Into Madness”. Those songs are very representative of the band, and those are the songs that can seduce and satisfy any fan of extreme metal. All the lyrics are in english and you’ll find them printed in the booklet. Another important thing to mention is the guest appearance of Meyhna’ch from Mütiilation on some vocals.

Production is done by the band itself, being filthy and organic, yet again providing the space for the instruments and vocals to shine through. The beautiful and fitting artwork is the work of Juanjo Castellano Rosado, and I think it suits the music and image of the band very well.

One can not deny that Descent Into Madness has its charm and appeal to the wider metal audience! This French duo took me by surprise with their personality and confidence. The whole album can be heard here https://godzovwarproductions.bandcamp.com/album/descent-into-madness or just a single track in the video below.

Diseased Obvilion is a band like no other, performing funeral and ambient doom metal. “A Blackened Harvest Of Decomposure” is band's last ever release, so if you're a fan of obscure, dark and ambient doom then I think you should get yourself a copy of this album, before it's all gone. ... See MoreSee Less

My friend and partner Gabriel S. from Nihilistic Holocaust sent me another album for review. This time it is Diseased Oblivion from US, and their A Blackened Harvest of Decomposure album. There’re e...
View on Facebook
· Share

Premiere Swedish gothic trio De Arma released their new three-tracker EP called Nightcall via Silent Future Recordings . It contains only three songs, but our writer was quite surprised by the level of professionalism on this EP. If you like rich arrangements and catchy, sorrowful, dark and emotional atmospherically charged songs, and sound firmly rooted in the 80s Goth/synthwave, then do not hesitate to give De Arma a fair chance! ... See MoreSee Less

I was not really sure of publishing this review as it has very little in connection to heavy metal. On the other hand one can occasionally hear some of gothic doomy influences which I believe [...]
View on Facebook
· Share

Simulacre teamed up with their kinsman Archvile King in order to release a Split album - Modern Black Metal on one side, Thrashy Black Metal on the other. What's not to love?Out now through Les Acteurs de l'ombre Productions! ... See MoreSee Less

This particular Split album is, as the name aptly suggests, a near-even split between two French Black Metal acts with similar enough soundscapes for it to make sense that they are present upon the sa...
View on Facebook
· Share