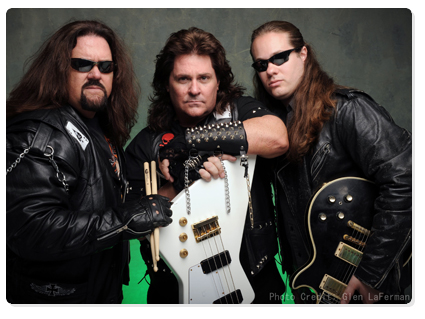 Brute Forcz is the side project of two American wrestlers (yes, you read that right) who goes by the names Slammer and Jammer, respectively. While I know nothing about their wrestling career, I can tell you that in Brute Forcz, they have teamed up with former Dio member Rowan Robertson in order to complete their trio. Brute Forcz is their self-titled EP and contains three tracks, with a running total somewhere around the ten minutes and thirty seconds mark. From the get-go it is clear that the band has strong aspirations to create music in the vein of classical Heavy Metal and Hard Rock acts such as AC/DC, Judas Priest and Motörhead (something the band itself have also admitted), and they succeed to some extent. The music is kept simple and repititive, with the occasional guitar solo thrown in. Unlike in Motörhead, however, they have kept the drums low-key and in a supporting role. Akin to Motörhead, on the other hand, is the deep, gravelling non-growl that the lead singer produces, yet sadly he does not reach the late Lemmy’s level (which, I must admit, would also be an unfair bar to set). Lyrically, the three tracks revolve around traditional Heavy Metal subjects (getting a beautiful woman, how dying sucks and not giving up, respectiely), so all in all they have all the basics covered – Now all they need it experience (excluding the guitar tracks who sort of steal the show at times). Brute Forcz have everything they need to create a great experience once they get the hang of playing together – But as they are now, they are not for me. But who knows, perhaps in the future? Nevertheless, the first track on this EP, ”Phat Ass Girl” can be found below, which should help you make up your own mind about the band.