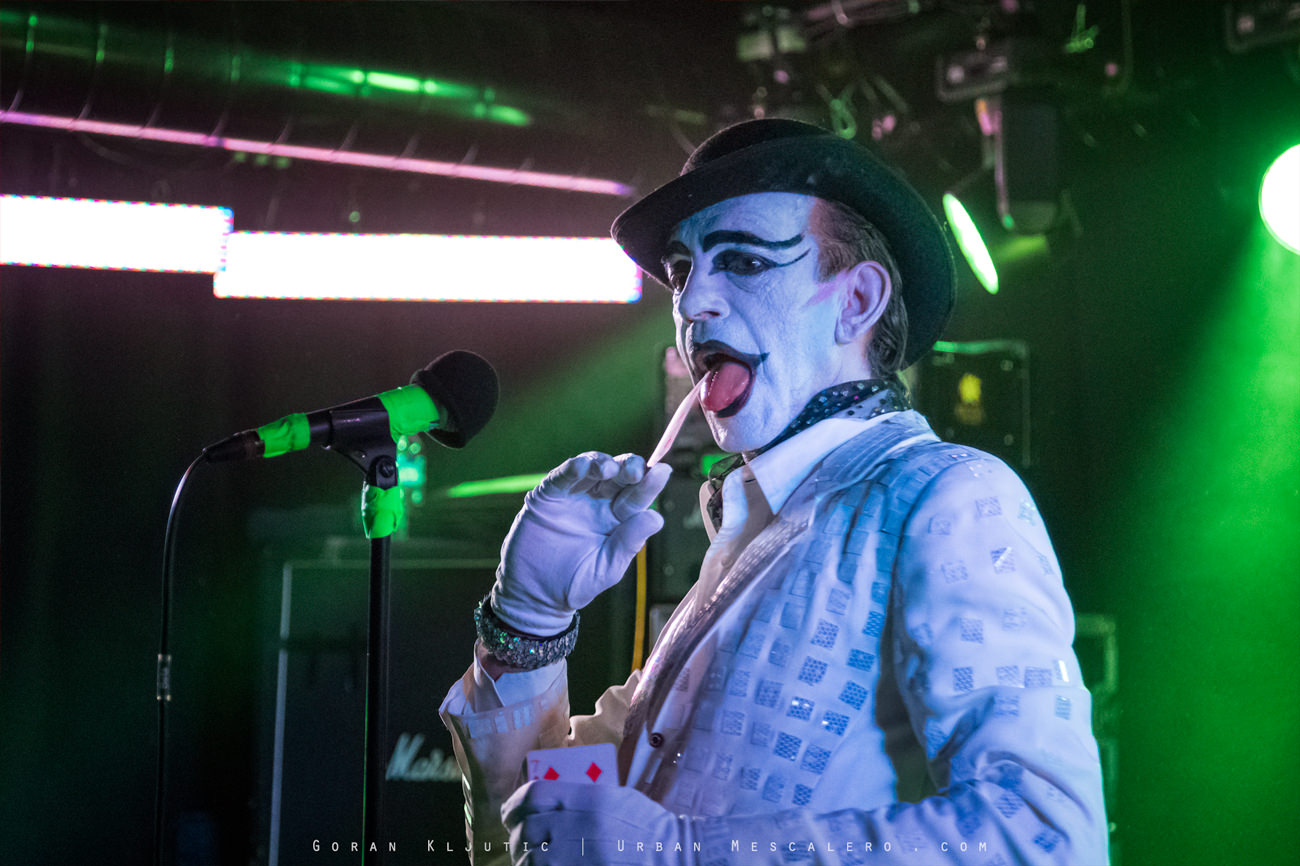 Few years ago legendary English punk rockers The Adicts were supposed to play Amager Bio venue in Copenhagen, but the show was canceled, apparently due to poor sales. But The Adicts don’t quit that easy so on the current tour, which celebrates the 40 years of band’s existence, they were again set to play Amager Bio. However, the history repeat itself and the band’s concert was moved from this 1000 people venue to its little sister BETA 2300 with capacity of some 150 people.

Now that’s a big blow for any band, one that is almost guaranteed to rub off on the show.

Beta 2300 wasn’t even sold out so the things didn’t look all that promising. But then the band took the stage in their typical Clockwork Orange inspired outfits with singer Keith “Monkey” Warren in front.
From the very first note of “Joker in the Pack” it was clear that the band had no intention of giving up. On contrary, the energy and positive attitude was immediate and instantly addictive. Before you knew it they ripped into “Horrorshow” and the skeptic in my was put to shame. Completely and utterly.

For the most part there was no breaks between the songs so the audience was assaulted with one upbeat punk rock anthem after another. And the crowd too, was into it from the start, with plenty of action in front of the low stage. Those ultra melodic choruses were accompanied by massive sing-along from the crowd and the whole thing was simply electrifying.

True to the tradition Warren’s face was joker-painted and through-out the show he used different requisites, many of which ended up in the crowd. One can argue the effect of the “droog” image in 2017, but combined with good portion of self-irony and simple likeability it works just fine.

When they did talk in-between songs they did so in a entertaining down to earth matter. There was no oscillations in the good sound and the electrifying energy and even confetti and other props worked extremely well despite the small low-roof room.

The whole evening felt like one long highlight, but placing “Viva La Revolution” towards the end of the end of the show is always a clever move and closing the show with cover of Rodgers & Hammerstein’s “You’ll Never Walk Alone” is safe, but nevertheless a bullseye.

But even after the end the band was singing to the music from the PA and they also made sure to say hi to all those who wanted to greet them. Warren was at the edge of the stage for long time, taking pictures and talking to people.

What looked like a disaster waiting to happen was from the first note a victory. It’s impressive when bands who have been around for so long, deliver such good concerts, but it’s almost miraculous when they do that after being downgraded to the tiny venue, which wasn’t even sold out. All that is what made this a 10/10 concert.
Regardless if you’re fan or not, do yourself a favour and see this band live. They are on tour now and God knows they are not able to go on forever.