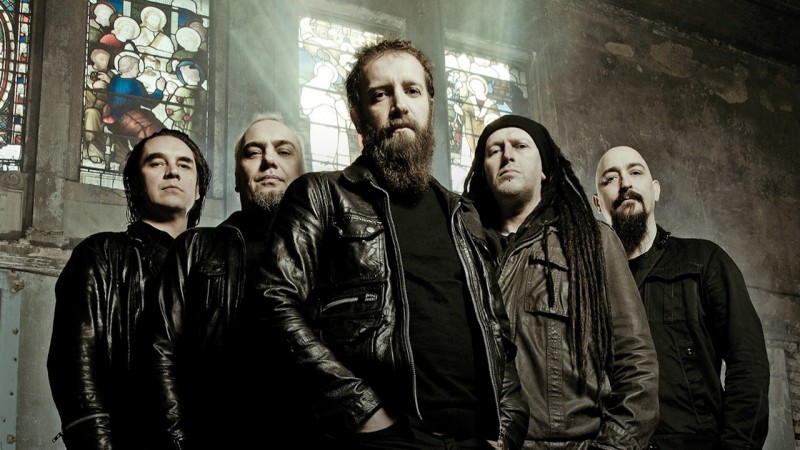 Sinistro is a female fronted Portugese Sludge Metal quartet, one that has been around for the last six years. In that time they have released two full-length albums as well as a collaboration release, all of which has been fairly well received. Having released their latest album last year, they have set out on a tour to spread knowledge of themselves and their music.

Being the first band on the roster is never easy – Fewer fans tend to show up than when the main act takes the stage, and you are prone to several minor problems. Both of which proved to be true for Sinistro, who had to warm up a fairly decent crowd (but not at all a full venue), coupled with a small audio hiccup, which caused the vocals to be nonexistant for the first few minutes of their first track. And to top it all off, they had very little room to navigate on stage (since it was already filled with gear to be used by the main act. Neither of these caused the band any concern however, and they proceeded to deliver a highly energetic, albeit somewhat static, performance.

The female vocalist of Sinistro still managed to make the best out of it however, using the long instrumental parts of their songs to perform a dance of sorts, consisting of exagerrated, clumsy and sudden jerks and movements – In such a manner that it gave the impression og her being a life-sized string puppet. Her movements would have made a silent era movie star proud.

This approach by the vocalist was, essentially, the closest thing Sinistro did that I would consider a stage performance, instead having a heavy emphasis on immersion into their music itself, not the concert as a whole. An interesting approach, one that I personally found to be very effective when combined with the partially monotonous and downplayed yet still very deep performance.

All in all I found Sinistro to be a band that is both concise and intense while playing a gig, even when they only had time to play four songs.

It was still a very pleasureable thirty minutes.

Pallbearer have been around for nearly a decade, and during that time the American quartet have done their best to keep themselves busy, spouting full-length albums every few years. Their newest record was released earlier this year, and it serves as proof that old-fashioned Doom Metal has yet to go out of style.

Suffering from the same lack of manouverability as the band that came before them, Pallbearer is likewise undeterred. Doom Metal is about portraying deep and powerful emotions after all, and this can easily be done while remaining stationary and drawing the crowd into their own little world through a clear focus on ambience and atmosphere.

Their extra years as a band is evident, as the band manages to fill up the venue with ease, keeping all eyes on them as they seamlessly weave one track together with the next, only occasionally breaking the immersion in order to address the audience or introducing the next track – Something I could have done without. But those few break aside, the band for the most part more or less ignores the audience, pouring their energy instead into the task at hand, which is to deliver a strong musical experience, not a memorable stage performance. As far as I interpreted it, less seems to be more on this fine evening, and given the bands and their take on their respective genres, I would say that it has been used to full effect.

Pallbearer in particular managed to keep their tracks building up as their gig progressed, yet still managed to create a consisten level of intensity throughout the whole ordeal – All forty minutes of it, and it was the highlight of my day, the small breaks of immersion notwithstanding.

Paradise Lost is often considered one of the founding fathers of both Doom and Death Metal, yet through their impressively long career they have also delved into both the Gothic Metal and the more Rock-oriented approaches, which has been documented and released to the public in an impressive fifteen different full-length releases. The newest is entitled ”Medusa”, and is the entire reason that this British quintet graces Denmark with its presence.

If Pallbearer hadn’t managed to fill up the venue prior to these legends stepped foot upon the stage, then it would no doubt have happened very quickly after the first few steps hit the floorboard. The band made sure to mark their entrance in a manner fitting for their stature, having an epic-sounding piece of music marking their approach, before immediately beginning to wreak some havoc of their own.

The stage has finally been cleared of everything not to be used by Paradise Lost, giving the five members some additional room at their disposal, which is promptly, albeit discreetly, used. For the most part the bands seems to be performing a rather routine concert, taking a very laid back and relaxed approach – Yet still being able to amass any action or reaction from the audience with the slightest of motions.

As such they are capable of whipping up a much more energetic crowd than either of the two previous bands this evening (no doubt due to their own far more energetic, albeit relaxed, performance). As a matter of fact, I got the distinct impression that Paradise Lost is a band that is capable of delivering a solid gig with minimal visible effort; No doubt a testament to the sheer skill and large amount of experience this group of musicians have accumulated over the length of their career.

Of moments of note this evening I would like to point out situations such as having almost the entire venue chanting along on many of their more symphonic and near-ballad like tracks, managing to keep a would-be crowd surfer off the stage with a mere wave of the hand (and not even stop singing while doing so), as well as having enough positive energy to make several terrible jokes at both their own and our expense throughout the entire concert – Such as remarking that most of their fans are ”old cunts” (referring, among other things, to the fact that Paradise Lost as a band has been around for nearly thirty years) and deliberately mispronouncing the name of the city as ”Our house”, for no other reason that being able to make the joke ”in the middle of our street”.

Paradise Lost are definitely the band who had the most stage time this evening, playing a grand total of fifteen tracks, counting the three encores they were gracious enough to impart upon us, which meant that the band ended up playing for ninety minutes in total. However, since they are also the band who has by far the most material to choose from (as well as the fact that they played most of their ”Medusa” record), this only makes sense. You do not get to be a legend without getting some perks, after all.

And besides, the lead guitarist obviously enjoyed every second of it, which I must admit that I found to be very infectious.