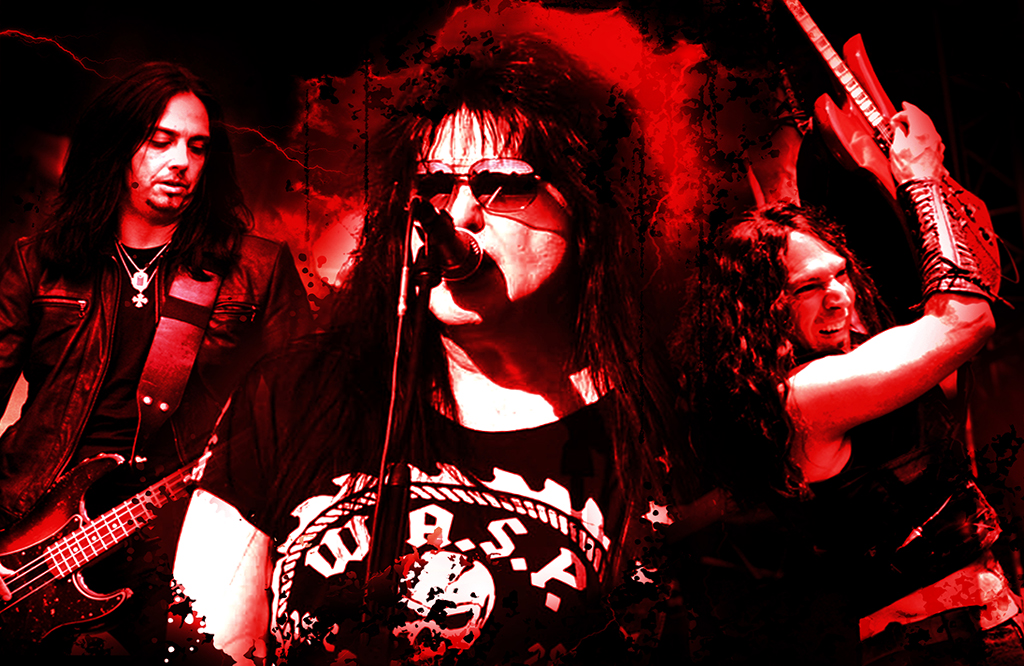 Despite going on hiatus a couple of times, US-based Heavy Metallers W.A.S.P has still been mostly active for the best part of the last three-and-a-half decades, releasing fifteen full-length albums and countless Singles, Live Albums and Compilations in that timeframe as well. One of the more well-received of these is the 1992 album ”The Crimson Idol”, a near-hour long album packed to the brim with catchy and well-known ballads and anthems. So now, 25 years after its initial release, WASP embarked on a world tour to play the record in its entirety, to fans, both old and new.

WASP starts off slow, by making great use of the three white screens they have placed around the stage: Upon them is projected a series of short videos, that serve both as an introduction to the gig at hand, as well as a glimpse into the early life of the lead vocalist and only remaining founding member, Blackie Lawless. These tell the story of the tumoultuous beginnings of what would become the core of WASP, before the voice-over is cut short by the entrance of the band, kicking off each and every track from ”The Crimson Idol” in chronological order, only to spend a little time between every track to further the story of the band slightly. It is a very serious and somewhat autobiographical approach, which serves to humanize the band (most noticeably the lead singer) to some degree, while at the same time doubling as a rather unique, and very interesting stage show. The band itself delivers a very energetic performance to the fully packed venue (Lawless himself again being the exception, as he stoically focuses on performing each track to the best of his ability).

The band takes full advantage of the venues sound system, creating an audio onslaught that succeeds in drawing in the audience, despite very limited crowd interaction from the band.

What little interaction they do offer, however, whether it be by a raise of a hand or by merely signalling the technicians to turn on the spotlights, it is met with an immediate and often loud responsive cheer from the onlookers.

And since we are talking about a band that has its rise during the golden age of the eighties, they cannot keep themselves from bringing an old friend along onto the stage; The double guitar, much to my personal glee.

Despite the years (and the apparent rough lifestyle that Lawless has been living) has certainly affected the vocalist, he this evening still proved that he can still put up one hell of a show, affecting an entire venue with minimal effort, and delivering a sound performance. This was especially evident during the track ”I am One”, the introduction of which was met with a massive applauds, as well as chanting along during the chorus sections.

For the entirety of ”The Crimson Idol” album, the band itself delivers a very energetic performance, while Lawless stays fairly stoic – This changed after the album (as well as music videos and voice-over) ended, and the band left the stage. At this point, small snippets of each of the more famous Singles from WASP’s long career began to play, disjointedly mixed into one another, yet clearly recognizable from one another.

Then, in best eighties style, the band re-emerges onto the stage, followed by an audiovisual onslaught unheard of until this point of the concert, with the band going all-in with their remaining tracks – Kicking off with ”Love Machine”. All holds barred, WASP spends these remaining tracks (all of which were obvious crowd pleasers) to burn through their excess energy (this held doubly true for the vocalist, who showed an unprecedented amount of physical movement – To the point where he even left most of the chorus parts of ”I Wanna Be Somebody” to the rest of the band as well as us, the audience – Not that any of us seemed to mind.

Ending the concert with an seemingly honest salute to their audience, the band then left the stage, after having pummeled our eardrums for a solid ninety-five minutes.

Not quite what I had expected from an eighties Heavy Metal legend, considering the somewhat somber nature of the performance up until the end, but it was very interesting and enjoyable nonetheless.