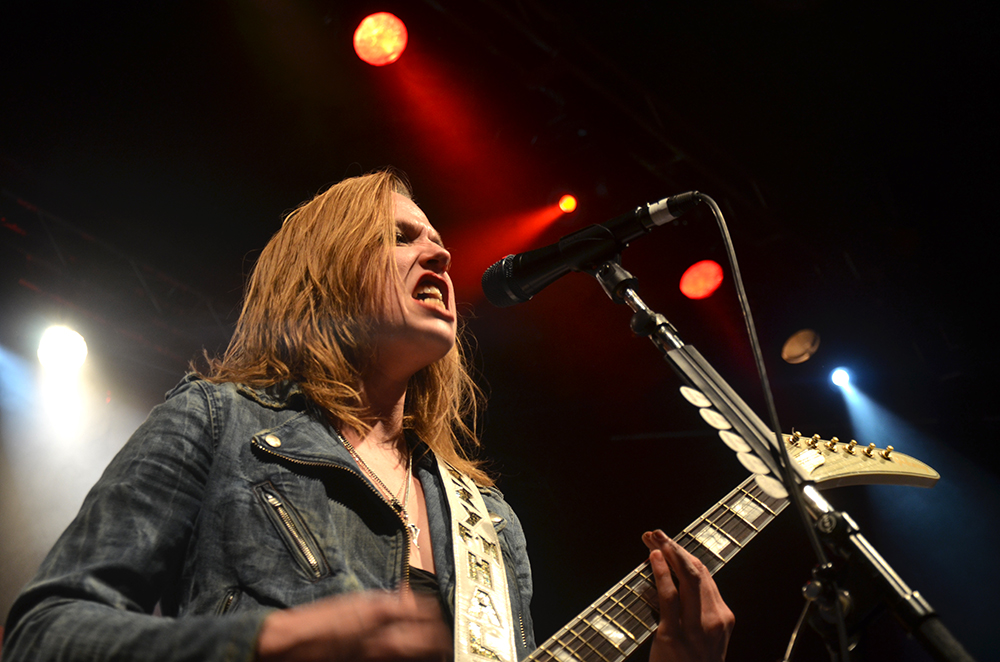 It’s kind of fun examining the carrier of Pennsylvania rockers Halestorm. Their 2009 debut gained decant attention nonetheless thanks to the single “I Get Off”, but it was their covers EP, Reanimate: The Covers EP that really put them on the musical map. The album was a very clever move for the band, and their record company – Atlantic Records. Each of the songs appealed to different segments and even the order of the songs on that EP, was carefully planned with just a perfect song order. However, the importance of that EP goes beyond the attention it got and the gazillion streams of their Lady GaGa cover. The recipe from the EP became a template Halestorm used for their career in general.

The formula worked, but the difference between Halestorm and piles of other bands who tried a similar approach for achieving a commercial success is that Atlantic’s timing was perfect, but let’s not forget the quality that this band possess. And there is a lot quality in this band that goes beyond the obvious – Lzzy Hale’s pipes.

But, before Halestorm hit the stage the sold out Amager Bio audience had pleasure of getting to know couple of interesting bands.

First of Detroit based Wilson (Good luck looking that up in Google) kicked off their half an hour long set with massive power and surprisingly decant sound. And throughout the entire show Wilson kept the energy high, so much so that they actually kept the crowd going. This is the first of two supporting bands, mind you. Band’s vocalist, Chad Nicefield, in particular was an energy bomb, on stage, in the photograph pit, surfing the crowd and he even got people on the balcony singing. Sure it was to the only song people knew, the cover of AC/DC’s “Back In Black”, but for the big part of the show it felt like it was the main band of the evening up there and not the first of two supporting bands. The band most definitely gained some new fans this evening.

Texas natives, Nothing More were up next. Band has six albums behind them, but it’s with their new album that they have gotten the attention of the broader audiences. Their self-titled album in a way feels like their Cowboys From Hell – a new start.
This was also apparent in their 40 minutes long show, which only included one song that wasn’t from the above mentioned album.

Energy was also a keyword for Nothing More’s performance, but unlike Wilson whose energy was outwardly, the energy coming from Nothing More’s energy was introverted. But the massive amount of the energy and melodic verses did leave the impact on the crowd. This was, however, mostly notable in-between songs. Jonny Hawkins is good and energetic singer and his singing live has more of an edge to it, which suits the song well.

Dynamics of the show was further strengthen by some fun touches like three people playing one bass guitar or all four members drumming.

Nothing more played a good show and bit more outwardly communication with the crowd could have made it even better. The closing song “Salem (Burn the Witch)” perfectly proved just that.

I remember seeing Halestorm live at Rock Im Park festival in Germany few years back in if I was to sum their performance up in a single word it would be the same word I’ve already used plenty in reviews of Wilson and Nothing More. The word is: energetic. There was just some youth energy to them then seems genuine and worked well live.

Since then the band has played piles of gigs, Lzzy has recorded duets with anyone in rock business, who needed a female guest vocalist and in general the band has been enjoying more success. Perhaps this has taken some of their edge off?

Halestorm opened the show with “Mayhem” from their forthcoming album Into the Wild Life, which worked well, but next three songs seriously kicked off the show.

Sure enough, the energy I remember from the German show was very much present in Copenhagen as well. Perhaps bit more polished, but just a bit.

Lzzy Hale is good. She’s really good. Her singing is top notch and while the rock-chick attitude might be bit cliché, she owns it and is suits her well. Her brother Arejay behind the drums is a mixture of a powerhouse and a clown. Sometimes the clown takes over, but it rarely goes there where it becomes embarrassing. Remaining two members of the band are far more reserved.

The crowd loved it and during the majority of the show, they Halestorm kept them on their toes and with smiles on their faces.

Arejay’s drum solo was much like most of drums solos, unnecessary, but good thing was that it was followed by “Love Bites (So Do I)”, which was one of the highlights of the show.

Some 70 minutes into the show, the band left the stage only to return with somewhat misplaced “Rock Show” and big singalong ballad “Here’s to Us”, which wrapped up things quite well. 80 minutes show was bit too short, but perhaps thanks to two good supporting bands, it didn’t feel like rip off.

Mayhem
Mz. Hyde
I Get Off
Freak Like Me
Bad Girls World
Daughters of Darkness
Dissident Aggressor
Amen
Break In / Familiar Taste of Poison
I Like It Heavy
Drum Solo(with snippets of Rock and… more )
Love Bites (So Do I)
It’s Not You
Apocalyptic
I Miss the Misery

Rock Show
Here’s to Us