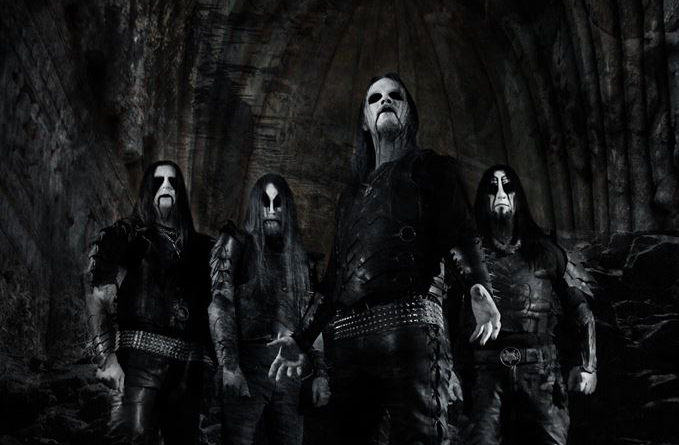 Dark Funeral is a Swedish Black Metal band, one that rose to fame during the early years of the Second Wave of Black Metal. These days they are one of the most prominent, if not the single-most prominent, Swedish Black Metal act; One that is well known for its strong ties to satanism and anti-christianity in particular, which they have shared with the public through six full-length albums so far, the newest one having been released earlier this year. Tonight they honoured Aarhus, Denmark with their presence, and promised to deliver a great show.

Keeping up the traditions of the Second Wave, Dark Funeral starts off quite humble, as well as stoic; Merely entering the stage in full war garb (medieval leather armour and corpse paint), and then immediately proceeding to play the first song. And despite a short problem (the whining of a feedback loop, one that the soundmaster quickly disposed of), the band was unperturbed and continued on delivering one track after another with grim resolve, and their stoicism hardly even wavering. Overall the band seemed intensely focused on the task at hand; And it was apparently contagious, rapidly pulling in most of the audience, causing them to give the band their full attention. As a side effect of this very little happened; No mosh pits, no circle pits, no stage diving; hardly even any fans who shouted wishes for songs that they wanted to hear. This intensity followed the band throughout most of the concert, making the band pick up the next track immediately after the previous one finishes; Only occasionally holding short breaks in order to keep themselves hydrated, no doubt made necessary due to the large and heavy layers of clothes that the four performers were wearing indoors. Sparcely added to these moments were short sentences, aknowledges from the band aimed at the crowd, mostly in the form of introducing the name of the next track, stating where they are and other short statements of that nature. All of these were said in the bands native Swedish, which helped to make the experience personal, somehow (despite the otherwise very lacking communication). When speaking of stage performance, the band also managed to keep it very spartan – Two inverted crosses, two pentagrams and two posters are all that decorated the stage, which itself was bathed primarily in a cold, blue light (mostly at the beginning of the gig), then with a large amount of red added, and finally also a layer of yellow – That aside, the band instead focused heavily on the musical aspect of the concert. This meant that the music was very intense and filled a lot, whereas the musicians themselves for the most part kept themselves stationary. And besides a single hiccup during the track ”Stigmata” (where the vocal track momentarily was drowned out by the guitar and drums – something that, likewise, was quickly remedied), this worked exceptionally well. The band did have a few gimmicks and gadgets, however – Such as a short, nine-tailed whip which was used in a sort of mock-penance ritual during the song ”Goddess of Sodomy”, as well as giving the finger to, presumably, God during the bonus track ”Nail Them to the Cross”. All in all, Dark Funeral makes giving a great Black Metal gig look easy, and even manage to be immensely polite during the few moments when they actually speak to us, the audience. The concert itself was supposed to end with the apt track ”My Funeral”, which would have given a natural, and quite good ending to a great evening; Nevertheless, the band decided to give three encores (something that I suspect was planned beforehand – Not that I mind). One of these was the track ”Atrum Regina”, which, surprisingly for me, managed to raise the enthrancement of the concert-goers even higher. All in all an evening well spent.