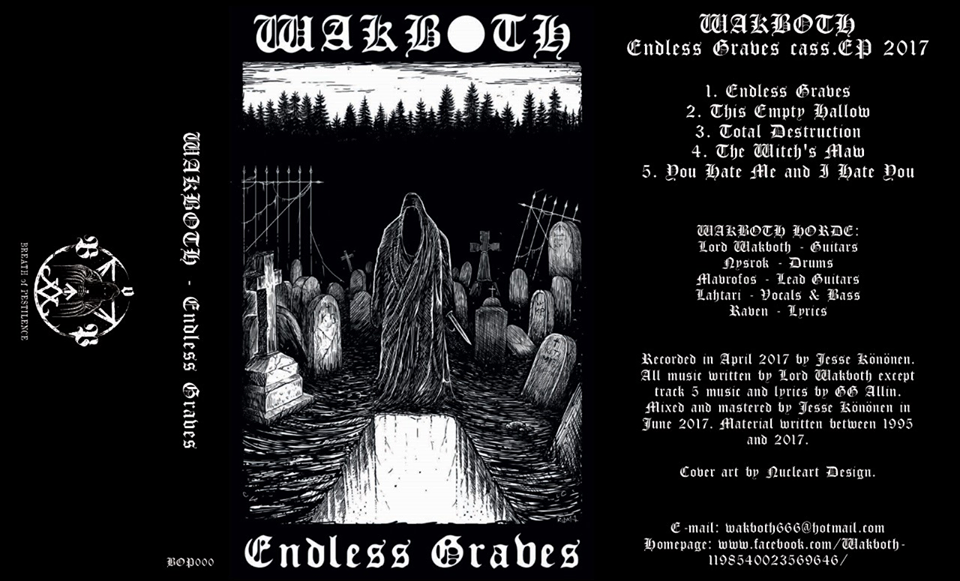 Wakboth is a Finnish quintet, born and raised in the nineties as a love child of sorts between the rising Second Wave Black Metal scene and the more traditional Punk and Thrash Metal approach (this is particularly evident by the fact that their newest EP, Endless Graves, contains a cover of a famous Punk musician). The end result is, unsurprisingly enough, a sonic onslaught of greatly distorted guitars and bass, pounding drums and gruff growls – All of which is soaked by a rough, low-tech mixing strategy.

Overall this makes Wakboth a clear shout-out to fans of the early nineties Black Metal bands – Hell, as far as I can tell, a track or two were even originally recorded back in those days.

The decision to take a more thrashy approach to their music is not an inherently new one (although very few bands in modern times manage to do it to the same extent that Wakboth does), and I would argue that Endless Graves is a release aimed for long-time fans of either the band or the genre as a whole. They share very few similarities with the more neatly mixed and relatively cleaner sound of more contemporary bands, which to me is a good thing – A band of utter aggression and unceasing riffs are fairly common, but one that still clings to the lectures of the early era; These are a bit harder to come by.

All in all Endless Graves is a fairly short experience, sporting six tracks (counting the aforementioned cover) and running at around the quarter hour mark. However, since it serves as a much welcome blast from the past, I am just thrilled that I got a chance to get a hand on this album.

At its core, I would surmise that Wakboth is an underground band, so I would not be surprised if it does not rise to international fame (despite containing former members of famous band such as Azazel) – But that does not in any way negate what a powerhouse performance this quaint little EP represents.

Recommended for fans of Mayhem, Sodom and Emperor.