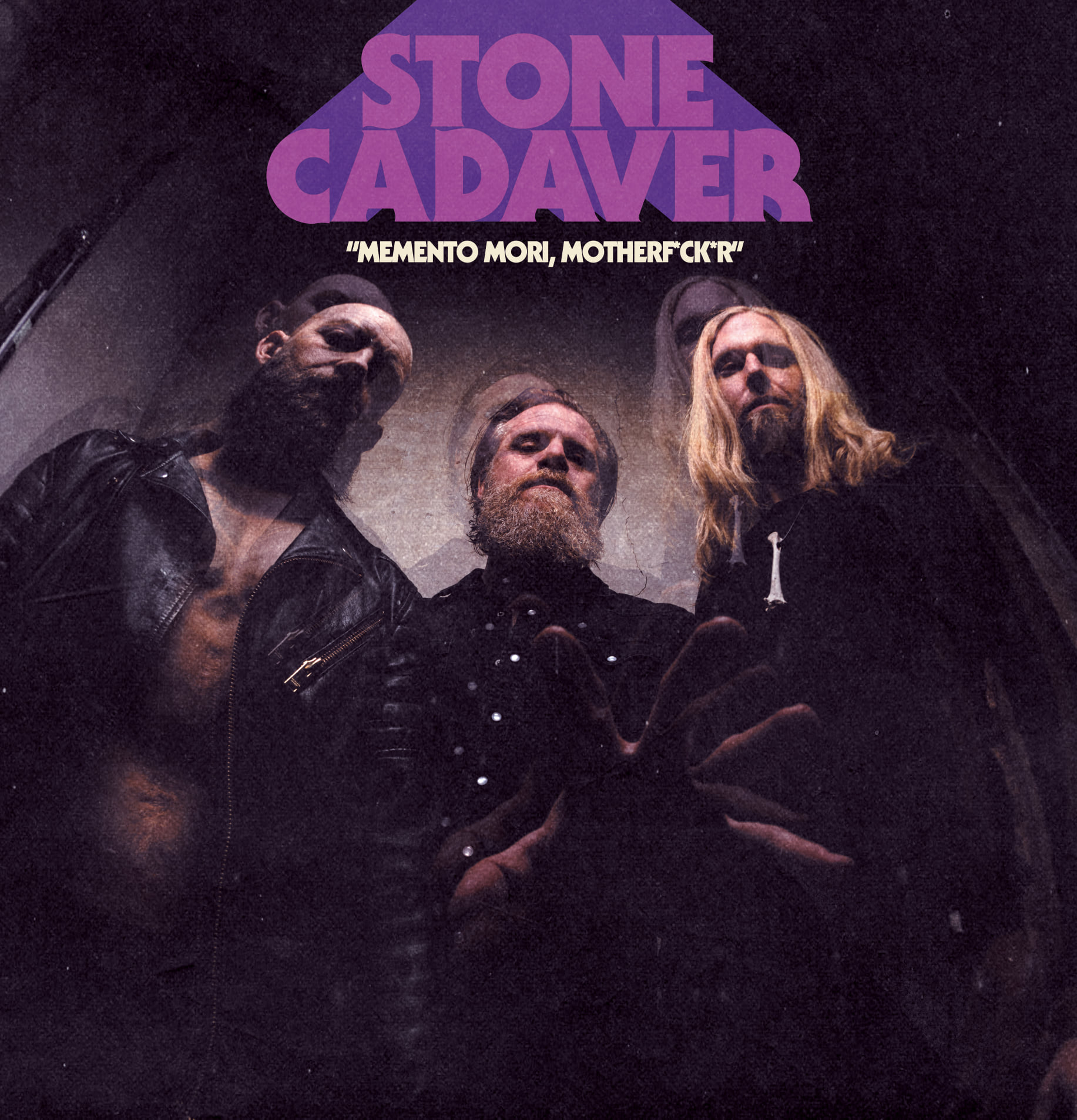 Formed in 2014 in Aarhus, Denmark, Stone Cadaver is a stoner metal trio consisting of Anders Bech Nielsen (guitar & vocals), Stevie Dalla-Zuanna (drums) and Andreas Cadaver (bass, keys & vocals). The band released their previous highly acclaimed full-length album in 2017, entitled Reject Remove Replace. Now this Aarhus-based trio are back with a new opus with its uncompromising title Memento Mori, Motherfucker. This brand new album consists of eight tracks on a CD, or five tracks on Side A and three tracks on Side B on a LP.

Where the previous album, Reject Remove Replace featured solid retro-heavy sound with clear inspiration from bands like Black Sabbath and Pentagram, Memento Mori, Motherfucker marks a return to the expression from the band’s heavy self-titled EP from 2014. In other words; it is much darker, more doomish, more metal and more dirty. Meanwhile, clear threads can still be drawn to Black Sabbath, but this time the inspiration from bands such as Electric Wizard, Monolord and Alice In Chains can also be felt in songs such as “Murder Mountain” and “Diseased Deceased”.

As said before, the music on this new eight-tracker is still packed with their trademark dirty 70s riffs fused with catchy slow paced grooves. Guitars are pretty much old-school, bass is distorted and drums are organic. Like its aforementioned predecessor, Memento Mori, Motherfucker is a riff-heavy journey through a dynamic soundscape and equally created from a vision of organic wholeness.

Memento Mori, Motherfucker opens with this low-tuned yet heavy instrumental intro “The Reckoning”. It’s just serves as a warm-up for what is coming next, a second visceral track “Realm Of Darkness”, (see video below) with some classic heavy riffs accompanied by the slow and steady beast by Stevie Dalla-Zuanna. Following song is called “Doom Christ”, which along with “Murder Mountain” is my personale track of the album. It’s here that the trio casts the dark clouds of pure doom above us. It is more of a going back to their roots with this Black Sabbath-alike massive wall sound, mostly created by raw guitars of Anders Bech Nielsen.

“Whip the Sinners” is another straightforward and intense song with crazy and wicked vocals, deeply inspired by 70’s doom metal and with clear lyrical references to the Catholic church. Time for a pause again with another smooth and calm instrumental entitled “Paean”.

On “Diseased Deceased” the band continues where it stopped with “Whip the Sinners” with its massive sound wall of pounding drums and hellish & metallic bass sounds. There’s a nice bridge or a small thing that connects all tracks with one another. Apart from the two instrumental tracks “Fare Thee Well” is another one of these tracks.

The hell finally breaks loose agan on the very last, a nine-minute long track, “Murder Mountain”. It starts with some eerie bass lines while the drums are being punished non-stop. Apart from being the longest, “Murder Mountain” is probably also the most varied song on the record with tons of also tons of breaks, variations and tempo shifts. I particulary enjoyed the final acoustic passage putting a climatic ending to this authentic and organic album.

Memento Mori, Motherfucker is produced by Tue Madsen (Meshuggah, Sick Of It All, The Haunted…) and recorded live in his Antfarm Studio. Tue Madsen has ensured the album a world-class sound, and the band has never appeared more sharp and focused.
The photo for the somber, lightly psychedelic album cover was taken by Anders M. Teibel and I think it perfectly fits into the band’s sound and overall image.

Memento Mori, Motherfucker is definitely a strong album with heavy, down-to-earth stoner metal mixed well with elements of progressive and hard 70s rock, dirty and crushing doom and classic heavy metal. The album is aimed at all fans of the mentioned genres as well the aforementioned bands.

For more info on this Aarhus, Denmark trio go to https://www.facebook.com/StoneCadaver or https://stonecadaver.bandcamp.com/