Near Death Condition – Evolving Towards Extinction 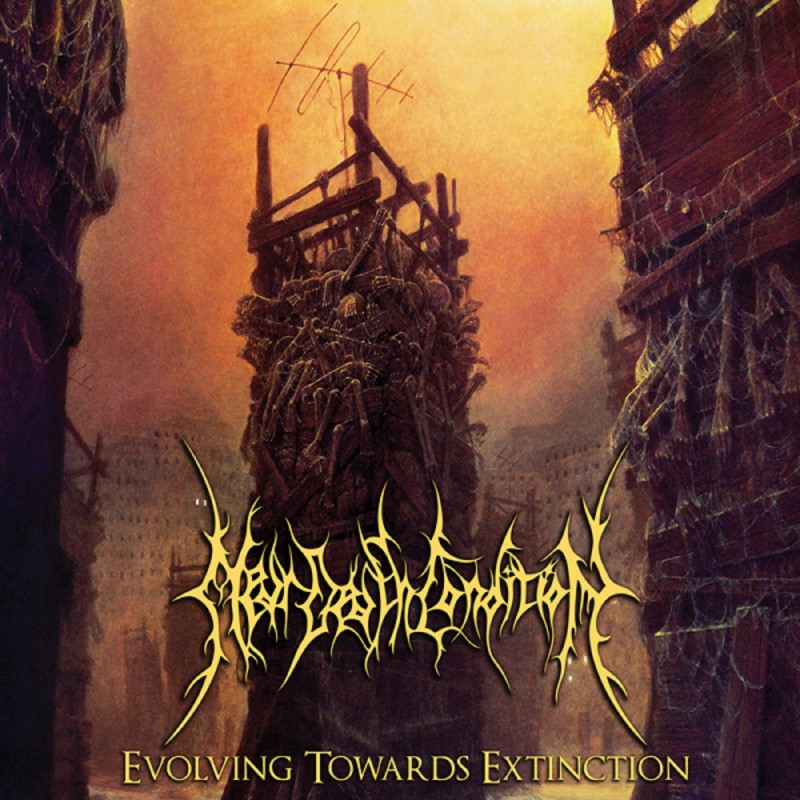 How to sum up Evolving Towards Extinction in one simple sentence: Fifty-one Minutes of relentless Brutal Death Metal the way grandmother has always hated it. The quartet behind this release is four Swiss musicians that have been working and performing together since the dawn of the millennium; And in that time, they have made their mark upon the world three times so far. The newest of these marks were publiced two years ago, and is the before-mentioned album. Having never even heard of the band (which I now realize is a grave error) caused me to be tremendously impressed by their performance from the get-go. And, as some of you out there might already have guessed, this means one thing: Near Death Condition have stayed loyal to their Death Metal roots, creating music in the vein of Obituary, Bolt Thrower and Entombed (all of which I am a huge fan). Not only that, but they also manage to make the album contemporary by cranking everything up to eleven (to use an old movie quote) and in doing so making a verytable onslaught of relentless and unforgiving riffs, solos, drums and menacing growls (from two different vocalists no less). They have by no means reinvented the wheel; But when you are capable of performing old-fashioned Death Metal with a vengeance, you hardly have to. That aside, they have still managed to create their own sound to distinguish themselves from their genre-kinsmen (see the whole ‘onslaught’ rant above), which definitely helps them in terms of being memorable and worthy of note. Musically, all four members of the band seem to be more than capable (due to the excessive nature of the album I am having trouble telling the instruments apart – Another great example of the sheer aggression Evolving Towards Extinction provides) as well as heavily dedicated. I have no doubt that Near Death Condition only releases tracks and records that they as a band can stand behind and be proud of (which is why, I assume, that we have only been gifted with three albums since the bands inception fifteen years ago), which is a sentiment that I can both admire and respect – Bolt Thrower did the same thing, after all. Choosing what track to highlight in this instance proved to be very difficult, but in the end, I decided upon the second track present on Evolving Towards Extinction, the track entitled ”Between the Dying and the Dead” simply because it was the first track from the album that popped up when I seached for it on YouTube. It is neither better nor worse than any other track from the album; Merely a great example on what this powerhouse of a band can deliver. Had I known of its existance back when it came out, it would definitely have made my top ten for that year.

Recommended for fans of Obituary, Bolt Thrower, Entombed and Deadflesh.