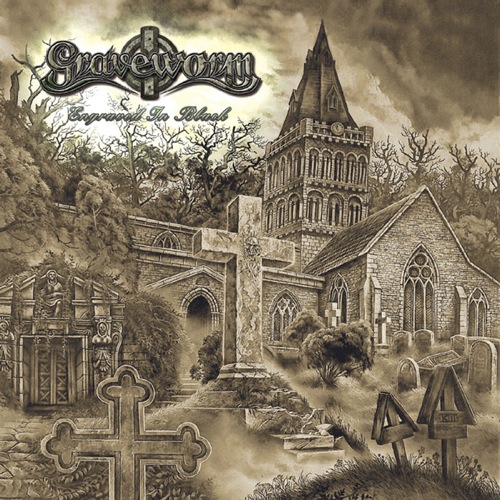 Italian Black Metal quintet Graveworm are quite well-known these days. So much in fact, that Metal Mind Records have decided to re-release several of their most famous (and, probably best-selling) albums in a limited Golden Disc format. The first of these is the album Engraved in Black, the bands third full-length record to be introduced to the masses. Having changed next to nothing from the original release, it still contains a grand total of nine tracks, two of which are instrumental and one is a cover of the arguably very famous R.E.M song ”Losing My Religion”. That is by far the least interesting track present on Engraved in Black however, since their own material far better suits their chosen playing style. Being a somewhat Symphonic Black Metal band even early on in their infancy and as such it is very obvious on this album. Knowing what comes ahead causes this album to pale a little bit (mostly because many of their following albums surpass this one on several levels), yet it is still a very good album, and a must-have for any Graveworm fan. Not to mention that the golden finish on the record makes it just a bit more special than usual. And, as per the original release, ”Thorns of Desolation” is still by far the best track on the album. www.graveworm.de/