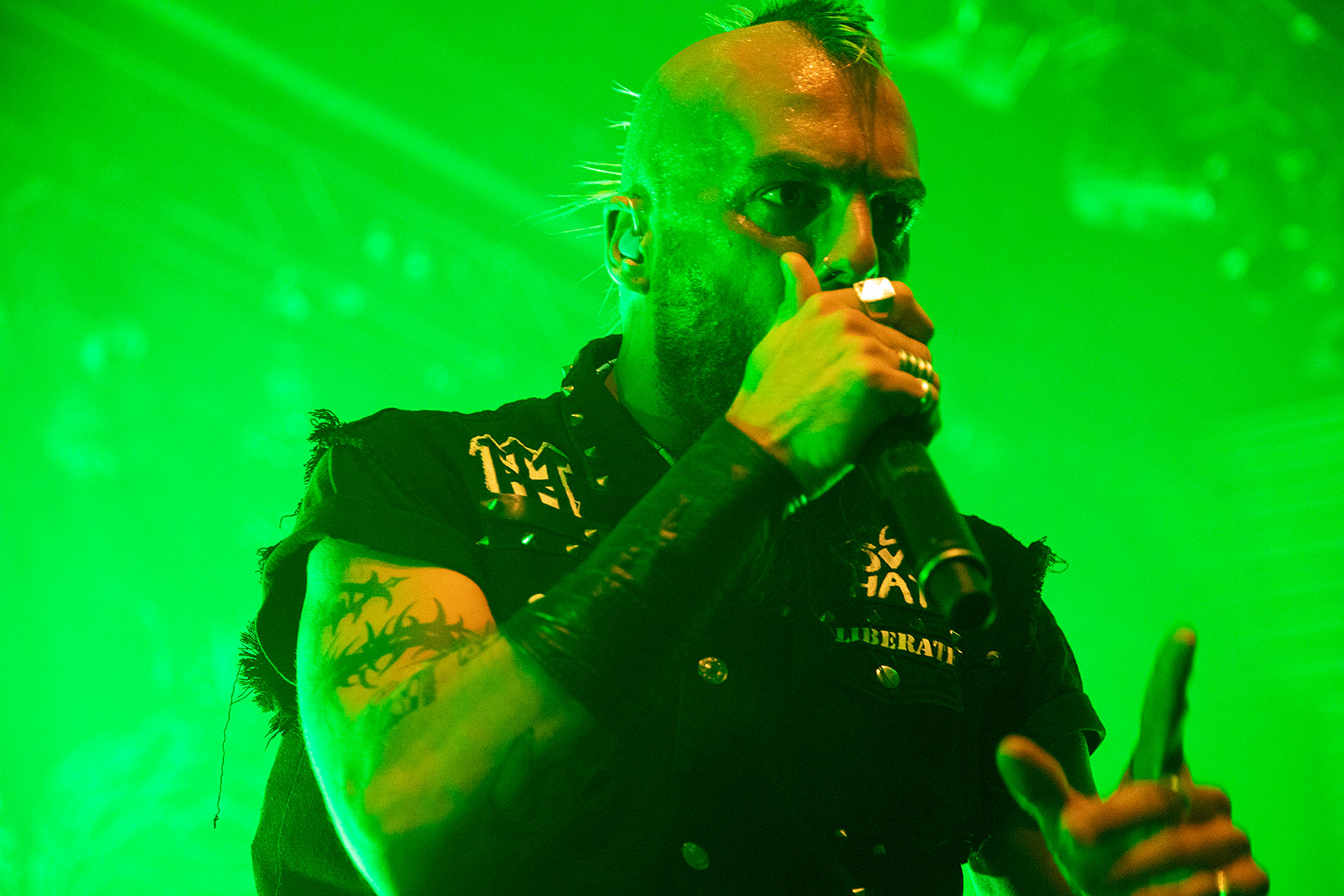 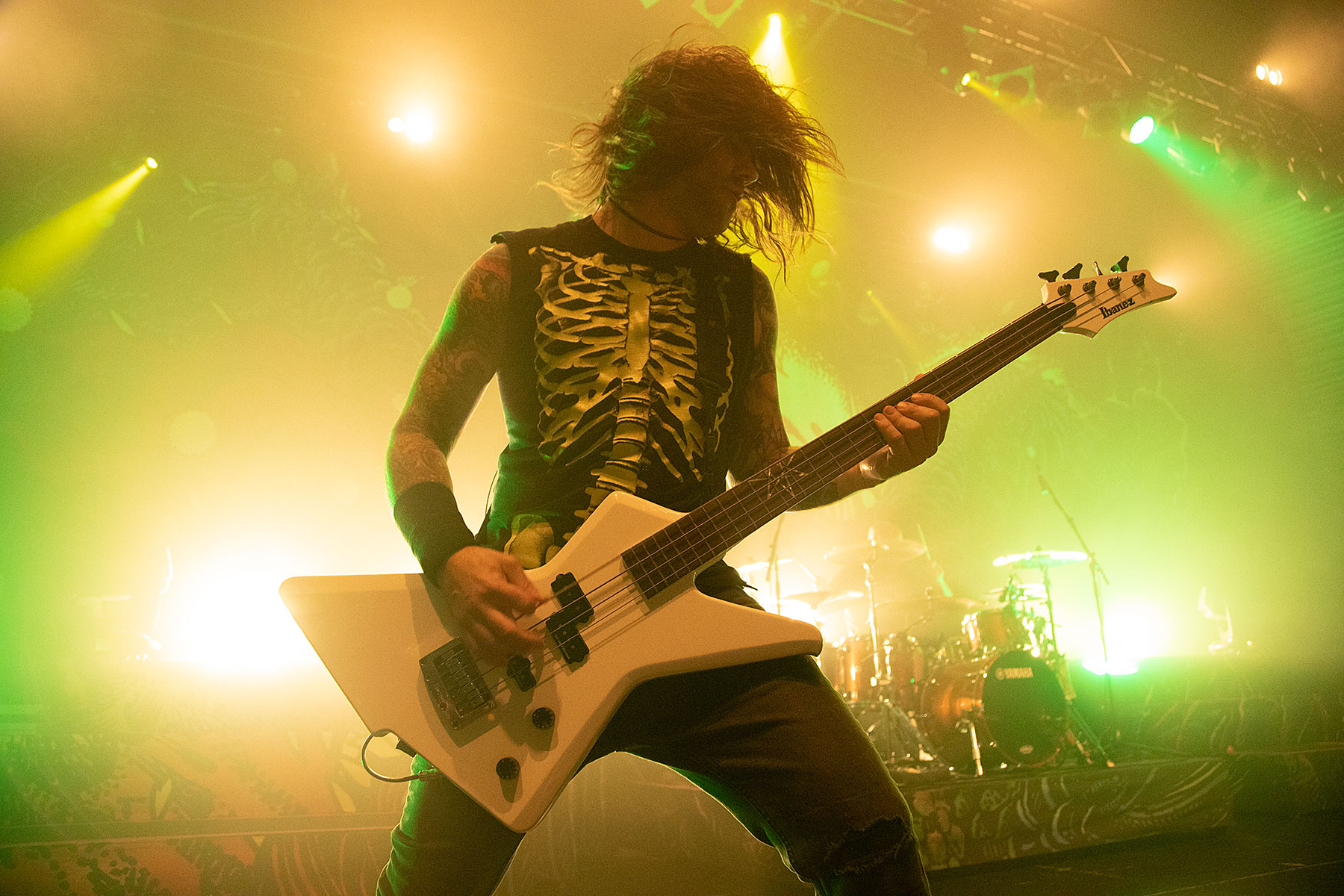 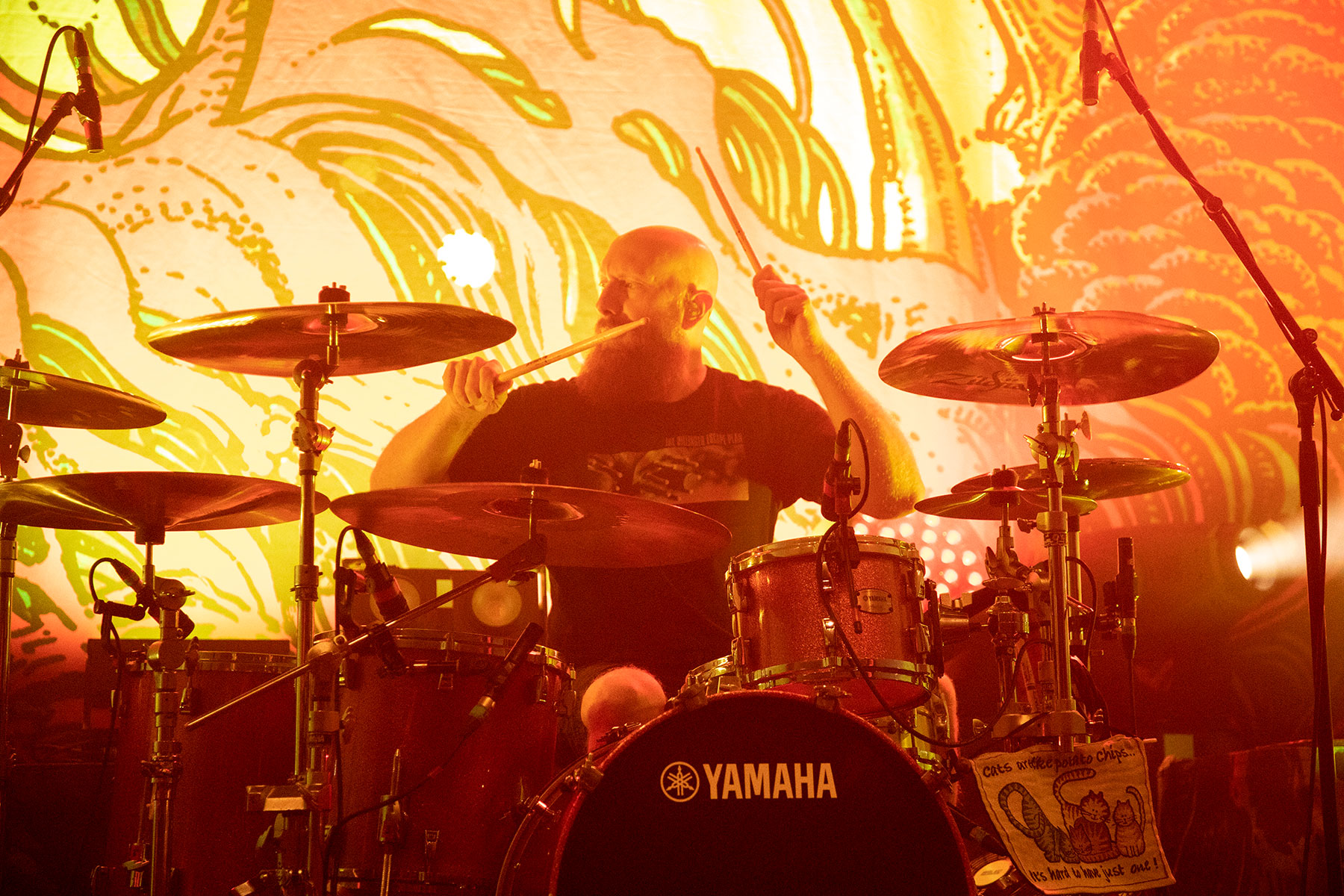 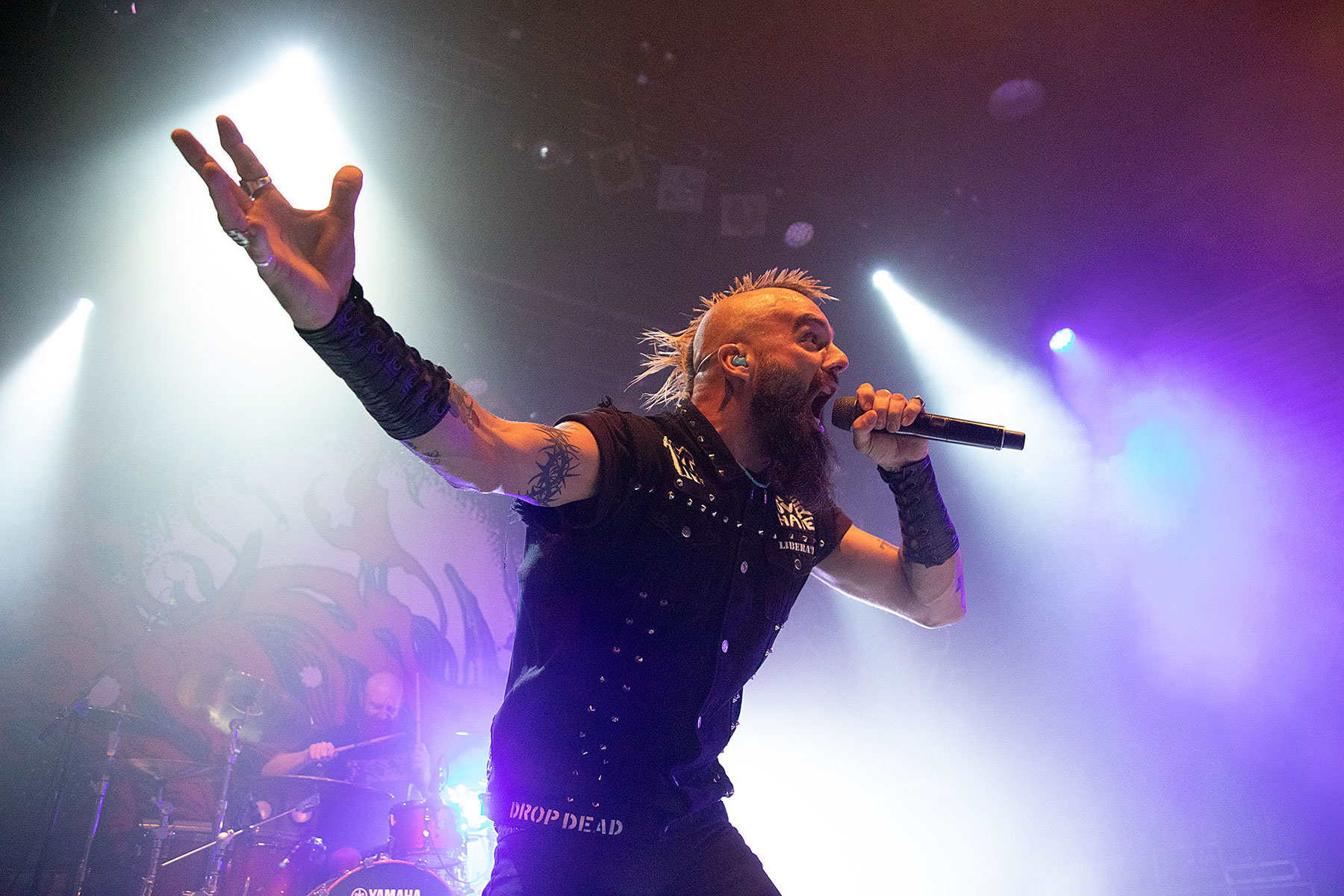 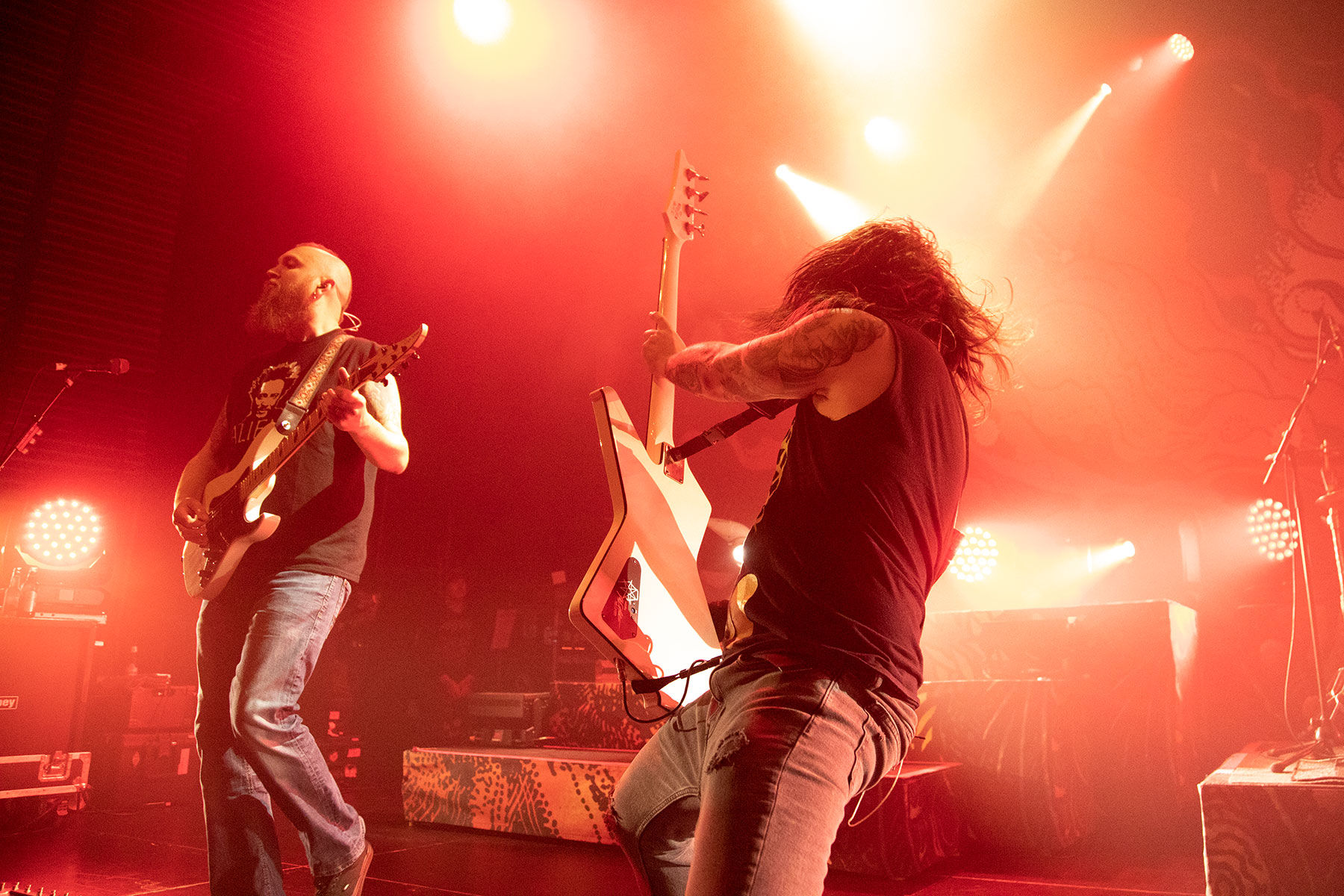 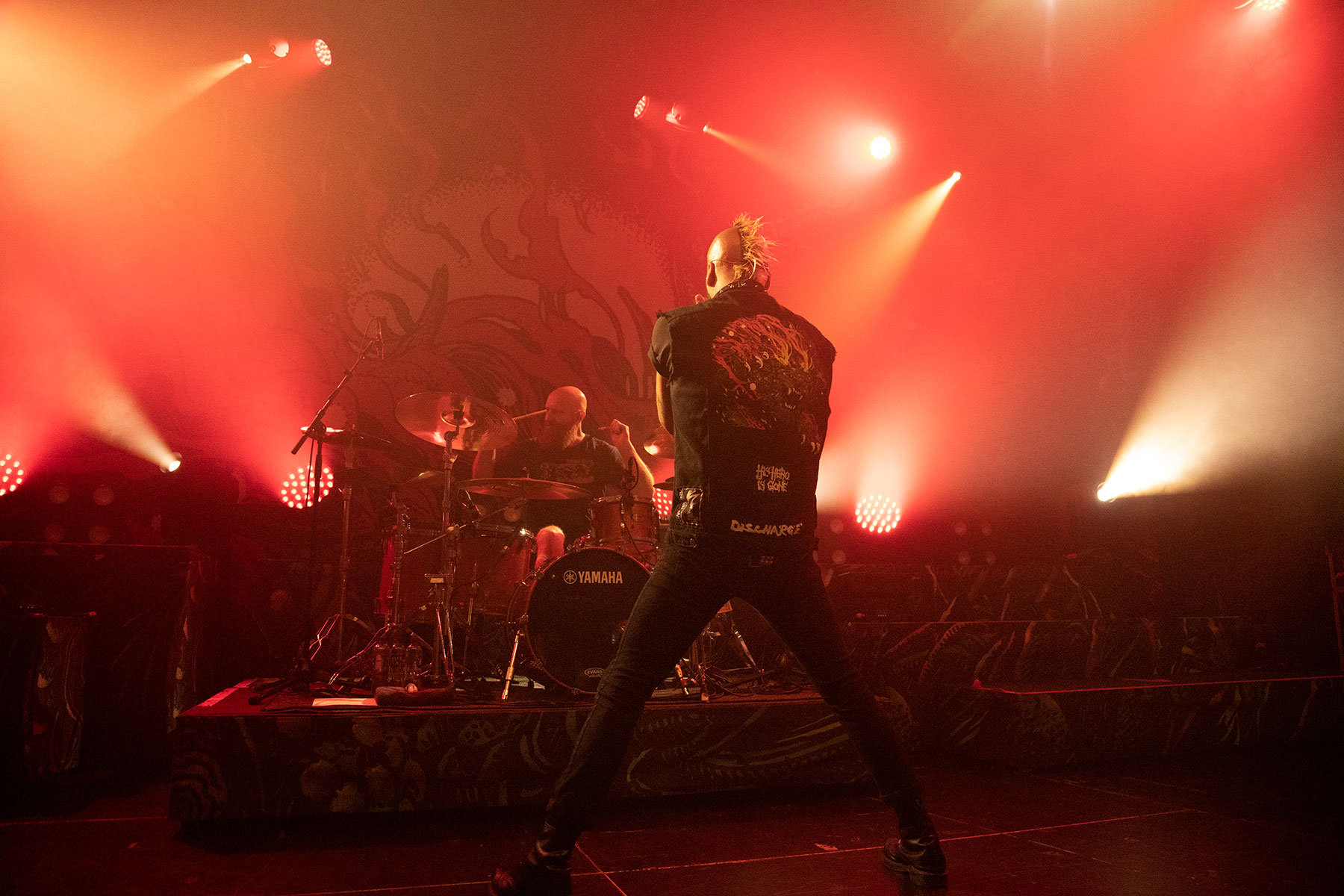 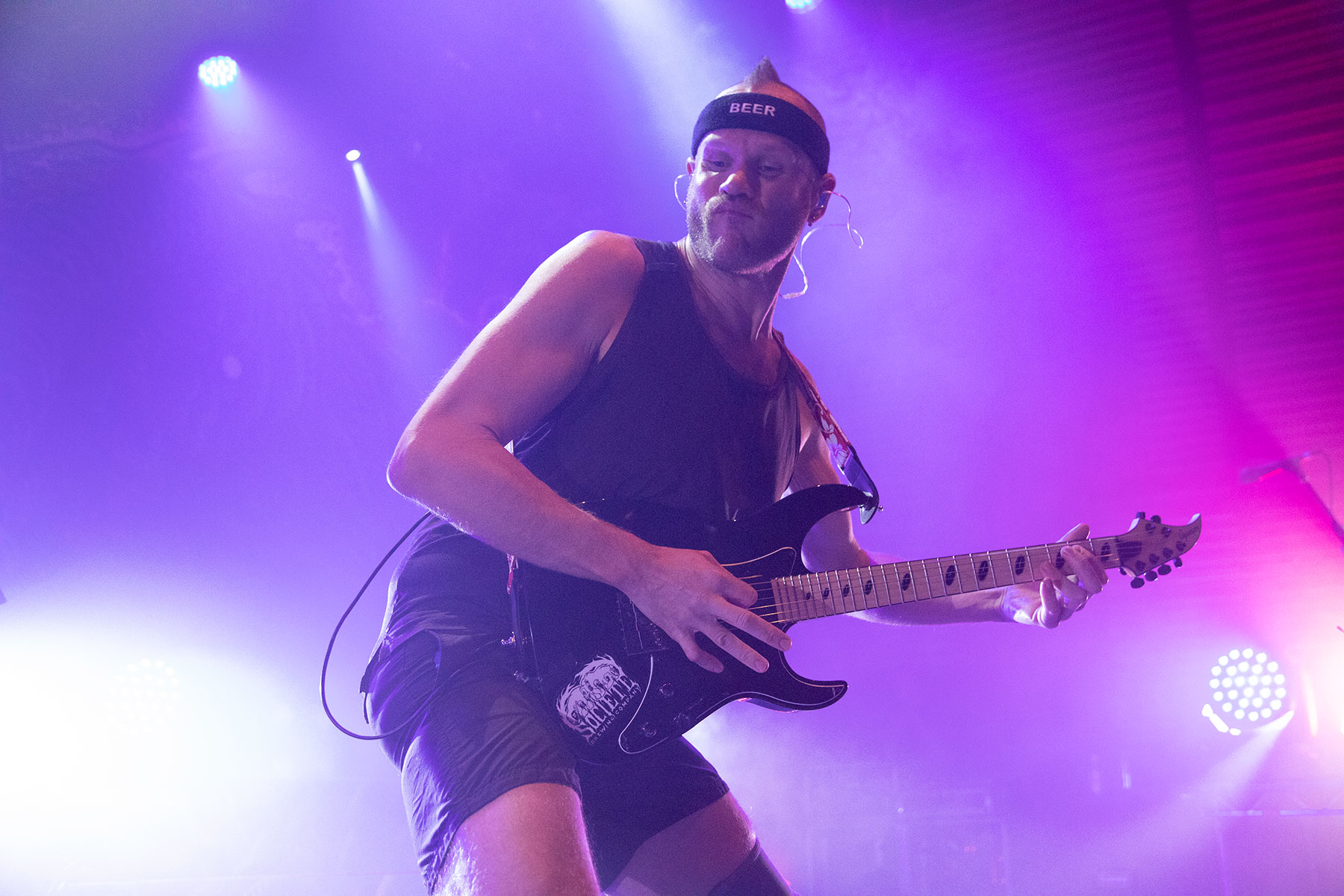 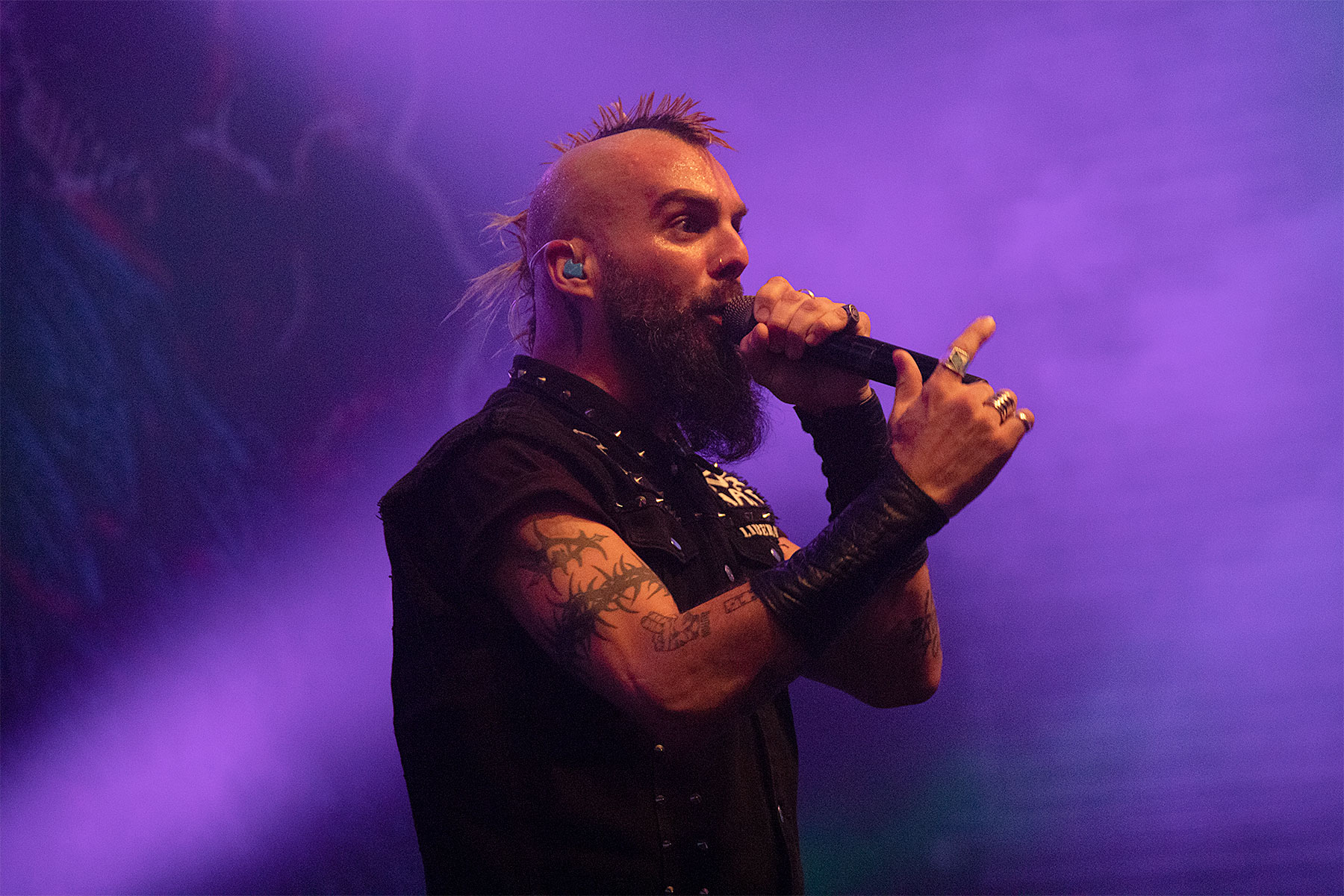 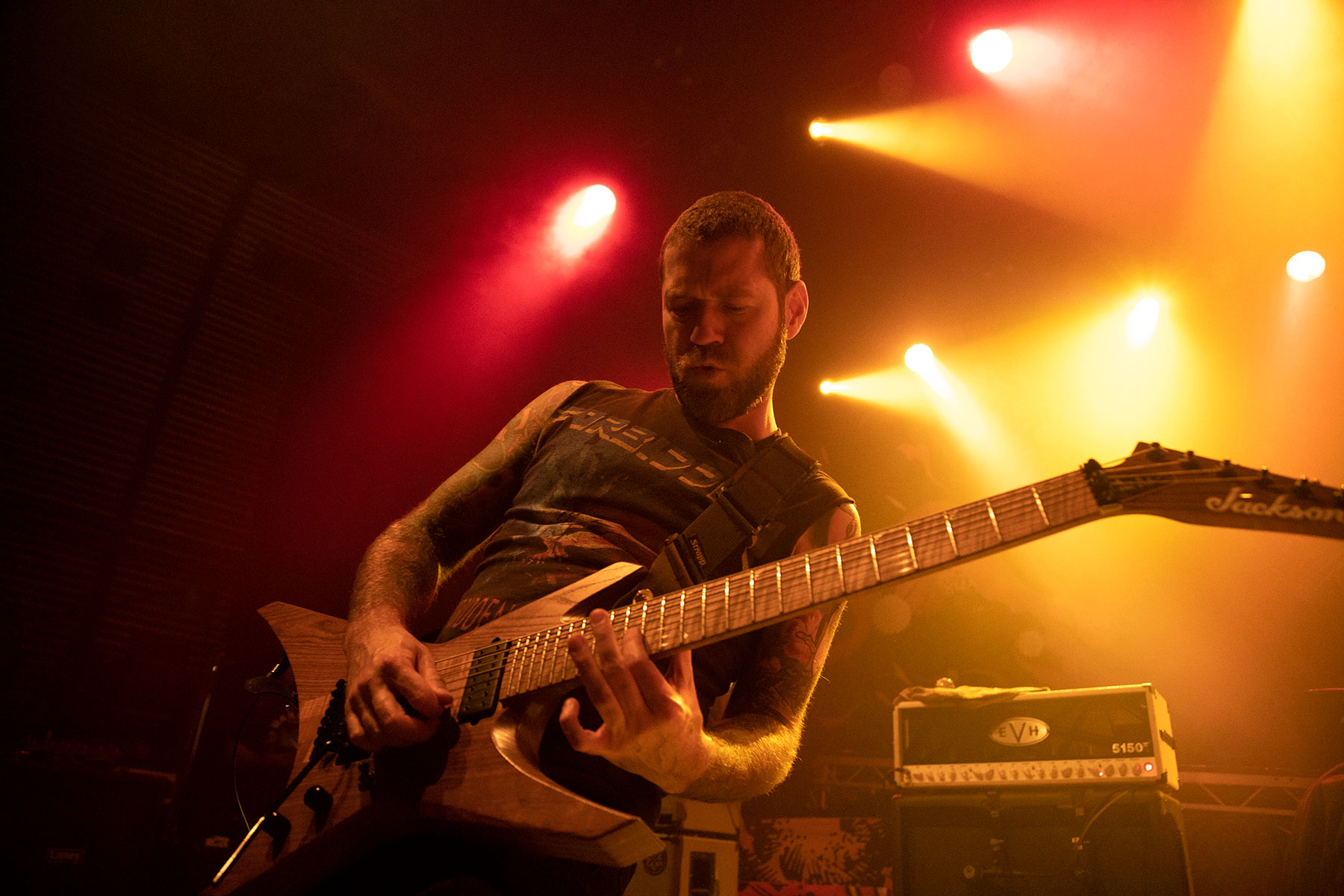 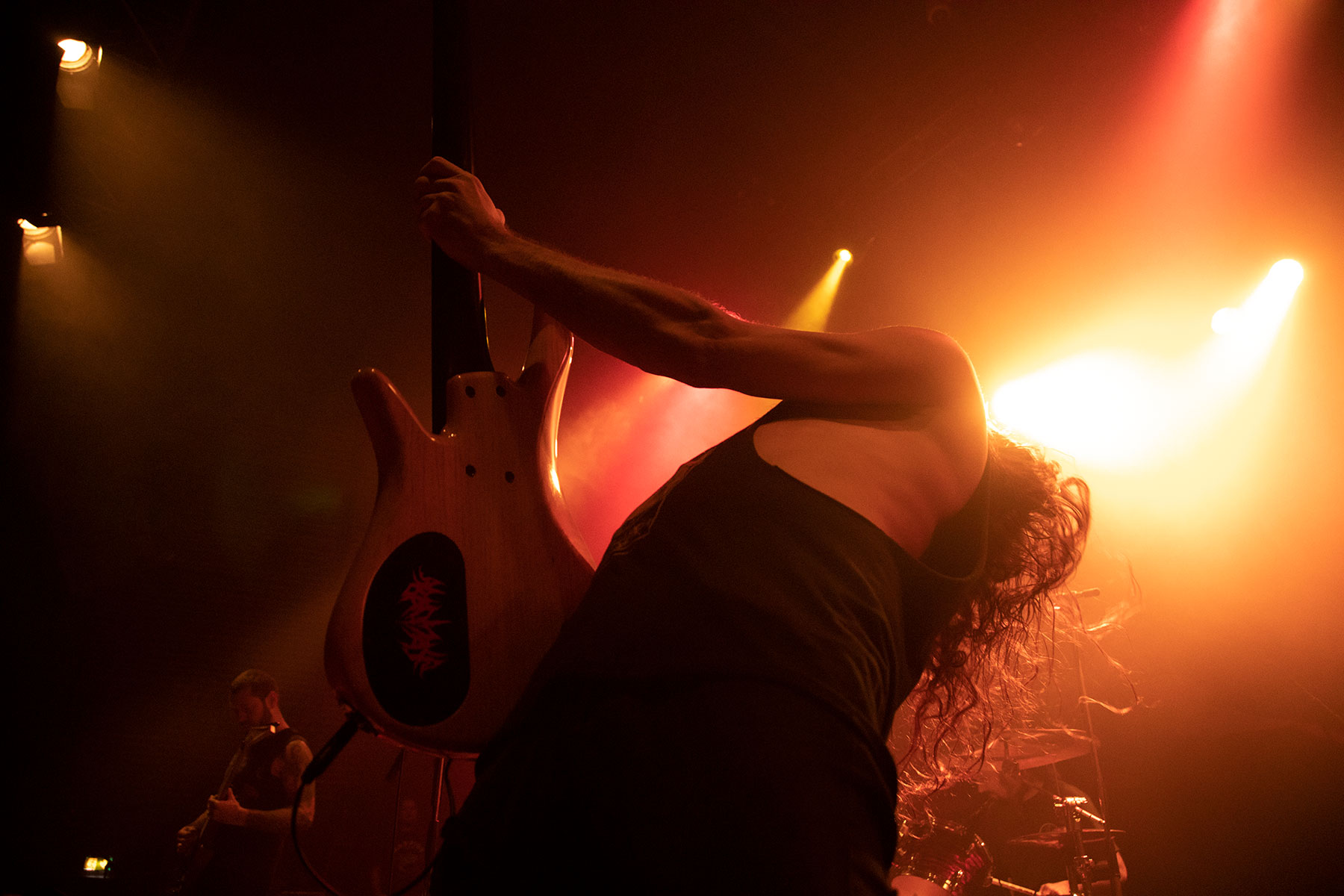 Killswitch Engage is celebrating their 20-year anniversary this year and released their eighth studio album called Atonement August 16th. The Boston based metalcore band is headlining a two-month European tour this fall promoting their new album and, on this occasion, they are visiting Amager Bio in Copenhagen November 2nd. Even though I have heard all their albums, and really love the band, it will be my first time seeing Killswitch Engage live, and I cannot wait to see and hear them perform. The concert is closed to sold out and the venue is packed with metalheads awaiting to watch the beasts from Boston. But before they come on stage, we have two support bands to watch first.

The first band out this evening is Tenside from Germany. I have never heard of this band before and when they enter the stage, they seem a bit hesitant and by the looks of it, so does the crowd watching. I can sense that the audience is somewhat trying to figure the band out in the first couple of songs, as am I, but when they start to play their third song on their setlist, “Unbreakable”, the band is really getting the crowd going. Singer Daniel Kuhlemann is making some kicks up in the air and is screaming his heart out, and I come to realize this band is actually really really good. I catch myself looking at the drummer Johannes Jörg and I am totally impressed at what he is doing with his craft! He is rock solid, and his beats and energy are impressive.

When the fourth and fifth songs are playing, I can totally feel the energy from the band and the audience is starting to jump around and seem to enjoy the performance from the Germans as much as I do. Their sound could be described as pure, raw metal, but I don’t like putting labels on bands. I have two labels: good or not so good, and this band totally fits under that first category. They sound really tight and all five are great musicians in my opinion. If these guys are planning on coming back to Denmark for another show in the future, I will surely love to see them live again.

Tenside did a great job getting the crowd warmed up, and next band up is Revocation from the same hometown as the headliners, Boston, Massachusetts. When they start to play, I can hear right away that this is far from my cup of tea. Don’t get me wrong, I can like and listen to death and thrash metal if I am in the right mood, but all I can hear is double pedal drums, drums and a little bit more drums.

It is hard for me to stay focused on the music as it is a little bit too “noisy” for my taste. But open minded as I am, I try to give the band a fair chance and continue to listen and watch their performance with a neutral point of view. And I have to say that the band puts on one hell of a show with an energy level rarely seen. Drummer Ash Pearson is actually a really good technical drummer, and together with the rest of the band they have a sound that is completely raw and thought out. And even though I am not totally sold by their show, the crowd seems to appreciate what they hear, because I see a lot of heads banging and hundreds of horns up in the air. And Revocation did a great job getting the audience in the right mood and warmed up for the headliners.

The time has come for the headliners Killswitch Engage to enter the stage, and the venue is totally packed with anticipated metalheads.The band opens the show with the first track off their latest album Entonement, “Unleashed” and I literally get goosebumps all over. Singer Jesse Leach is totally amazing with his voice, and the crowd is going wild! WHAT a great opening song for the show! And the bar is set! The entire band has an incredible way of interacting with the audience and one can sense that they are truly enjoying what they do up on that stage, and I personally love what I see and hear.

The band is asking the crowd for a moshpit, and a moshpit they get! It is so cool to see all these people running and jumping around but as always in a “friendly type of metal way”. And it is even cooler to watch from above, by the balcony where I am standing. One thing I like is to hear that they actually play songs from almost all their albums during the show. But what really surprised me was to hear the crowd sing their hearts out to “My last serenade” from the 2002 album Alive or just breathing. It warms my metalheart to see and hear all these people that just had been running around like crazy in a moshpit, sing along to a song with such deep and beautiful lyrics. But that’s one of the reasons why I love this band as well, as they are so diverse in their music. The entire sound picture is great this evening for Killswitch Engage, it is almost close to perfect. And that also makes one hear how incredibly talented all five band members are.

I catch myself getting goosebumps several times and I am floored by Jesses voice. When “I Am Broken Too” from their latest album starts to play I am so touched by the vulnerability in Jesses voice that I almost get tears in my eyes. He is truly an amazing vocalist. One of my favorite Killswitch Engage songs are “My Curse” from their 2006 album As Daylight Dies and I am SO happy that I get to hear and see that one played, and I love the fact that the quintet kicks ass playing it live. The whole setlist this evening has been great for Killswitch Engage in my opinion, and as I stated earlier, it has been really cool to see them play songs from seven of their eight albums. And how to top off such a great show and setlist if not with a cover from the king himself, Dio. “Holy Diver” has been covered many times, by many different bands, and it is easy to destroy such a classic song. But Killswitch Engage pulls I off on the Entonement album and they also do so live. The show started with a BANG, and it surely ended with one as well. A perfect ending to a perfect evening.