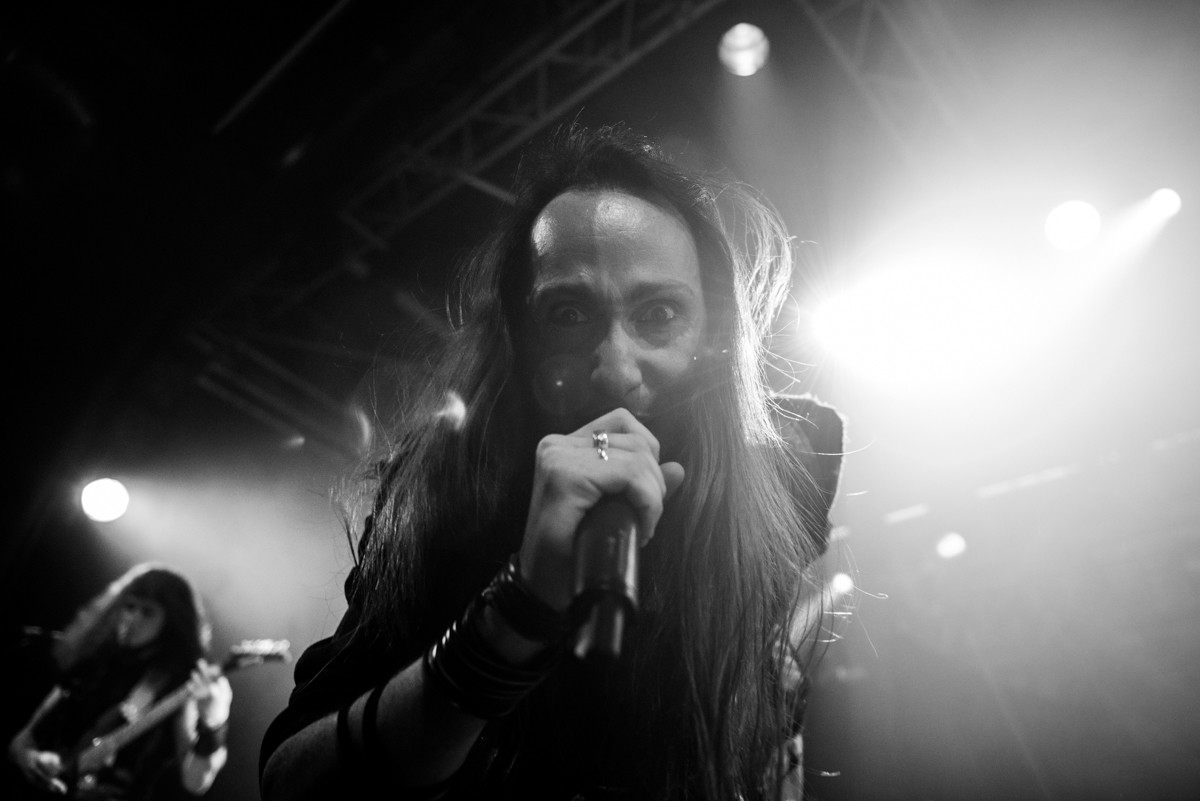 Vexillum is an Italian Power Metal band that sprang into existance back in 2004 under the name Shadow Vexillum. Their name was shortened in 2007 to simply, surprise, Vexillum, yet their fantasy themed lyrics delivered from a strong Power Metal background has remained the same.

Apparently feeling like starting the concert with a bang, Vexillum had cranked everything up to eleven as well as kicked it into high gear from the second the very first drumstick hit its target. This was ridiculously effective, to the point that the instruments almost completely drowned out the lead singers backing vocals. That aside, the singer remained blissfully positive throughout the ordeal, almost at all times having either a smile or a smirk screwed on to his face. A few of the songs had intros containing more traditional instruments (such as flutes and the like), which the band opted to solve by using playback. Not a bad idea, since it allowed the musicians to focus on their instruments and gave the lead singer enough breathing room to also try to get us, the audience, to sing along on the choruses – which worked to some degree of success. All in all, Vexillum is a small army of crowd pleasers lead by a very charming front man who managed to rile up the fans with very little effort. And, since you obviously cannot start with a bang without ending the same way, Vexillum did just that.

Icelandic Folk Metallers Skálmöd are quickly becoming what you could consider veterans within the Folk Metal scene. Despite not having truly received world-wide recognition (probably due to the fact that very few understand the language they perform in – Icelandic). That aside, they are still a force to be reckoned with and their native tongue works surprisingly well with their chosen genre.

Compared to the band that came before it, Skálmöd had a far less loud introduction. Instead, they promoted Vexillum by wearing their merchandice on stage and starting straight off the bat. And, despite my misgivings about not understanding a word of any of the bands tracks, they proved to be very popular, both with myself and with the audience in general. To make things better, the soundmaster had taken the chance between the bands to fix the audio, which actually made it possible to hear the backing vocals (always a plus). On top of that, the lead singer insisted on speaking (pretty good) Danish to us, which, unsurprisingly made the band even more popular. In order to further distance themselves from Vexillum, they focused only marginally on interacting with the fans, instead only introducing the songs (in Danish) and then pour the rest of their efforts into the perfect performance. And since the bands language made it practically impossible to sing along, for some peculiar reason a veritable leek (yes, the vegetable) chaos, with people waving them around, hitting eachother and tossing them across the venue. Of other impressive feats performed by the band I can mention a very catchy double guitar solo as well as a wordless demand for a Wall of Death (which was performed almost immediately).

Both the oldest and by far the most experienced of the bands present on tonights line-up, Eluveitie has a reputation of never disappointing. Having released six studio albums and a string of Singles, EP’s and Demo’s to match, they have quite the repertoire of tracks to choose from and both the ingenuity and man power to exploit it fully.

Not wanting to fall behind their own warm-up bands, Eluveitie starts off with a flashbang-like effect, followed by a short monologue setting the mood for the rest of the evening. This also functioned as a cue for the band, who then stormed on stage with an incredible amount of energy, although in a controlled manner. No doubt prepared for a long performance, the band nevertheless keeps their show entertaining by both mixing up their tracks from different albums into their setlist and by moving around a lot, rotating positions and interacting with one-another in both amusing and otherwise entertaining ways (such as the lead singer and guitarist having a dance-off around the herdy gerdy player who was both amused and confused by this) and having playoffs, so to speak. After just a single song, Eluveitie had filled up the venue. Apparently having expected this, the band had gone to extreme lengths in order to keep the performance fluid, such as stacking almost ridiculous amounts of instruments in front of the microphones for the band members to take and use as needed and having roadies run on and off the stage with stools and whatever else the band needed. In order to make the experience even more memorable, they even went through the trouble of translating ”Call of the Wilds” to their native Swiss German and having their female singer teach the fans, in a very teacher-like manner, how to jodle along on this particular rendition of the track.

About an hour into the concert, the lead singer presented his thoughts about how Folk Music is the true heart and soul of music and how he would be honoured to share it with us. This was done by playing Folk Music for twenty straight minutes, all acoustic, all laid back. After that, the band went all out, drowned everything and everyone in an onslaught of sound and music. A single encore followed: ”Inis Mona”.