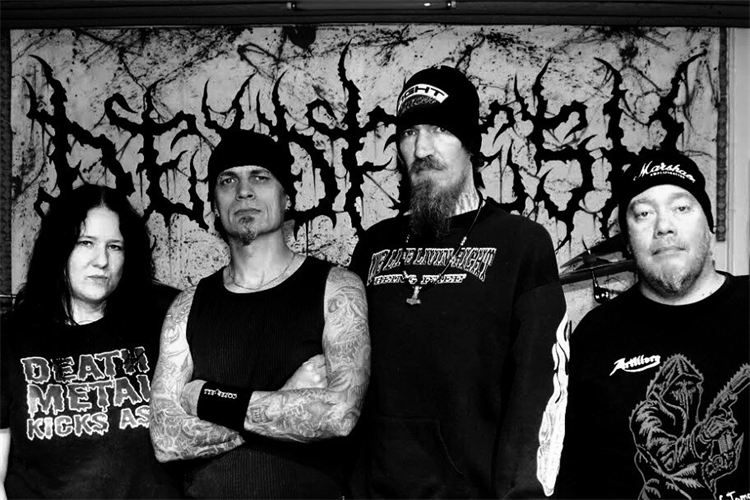 Deadflesh is a Danish Death Metal quartet founded back in the glory days of the genre in the early nineties. Being an independent band unsigned by any label (that I have been able to find at least) has caused them to hide away from the publicity and fame, that their music entitles them to. Here is to hoping that we can do something about that.

Metal Revolution: First off, thank you for taking your time to talk to us. Now first off, can you introduce the band? When and how did it spring into existance?

Deadflesh: Thank you very much for approaching us with this interview. Deadflesh came into existence back in 1994, like a Phoenix rising from the ashes of another band that never really got started. Deadflesh now consists of four persons; Jimmi (drums), Hell-e (bass), Sune (lead guitar) and myself Allan (growl and guitar).

MR: It has come to my knowledge that one, or perhaps even several, of your members also work as tattoo artists for a chain called Tatto World, residing in Denmark. Does this occupation have anything to do with the name of the band, Deadflesh?

DF: Only one member has worked as a tattoo artist, and that’s myself. Since 1997 i have been in the Tattoo World DK and Insaniac Art Tattoo. There is no connection from this to the name ‘Deadflesh’, which came to us from listening to Autopsy’s legendary ‘Mental Funeral’ album.

MR: You have recently embarked upon a tour around Europe, during which you will be playing in Kolding, Denmark in a few weeks. If these gigs turn out to be a succes, will you be adding more dates, perhaps even in the rest of the world?

DF: Well unfortunately it’s not a tour around Europe. It’s mainly locations inside Denmark. We only had a single gig outside Denmark, going to Germany. Untill now every gig has turned out fantastic and the audience has really been kind and supportive to us, so we would be delighted to add gigs to any location. In two decades we haven’t really been out there performing live, and now when we’re finally doing it, we absolutely love it.

MR: Adding to the previous question, you played your first ever gig outside of Denmark a few weeks ago in Lübeck, Germany. Was that a great experience? Any particular differences between playing in Germany versus playing in Denmark?

DF: Yes, it was a nice trip to Lübeck. We we’re driving there by bus, so we could also bring family members with us, and we had a great time. The only difference from Denmark that we got to realise, is that you have to bring your own microphone and stand. Fortunately the metal-people of Germany are nice, so we were able to loan both.

MR: Rumour has it that you are close to releasing your third full-length album. Is this true, and if so, what will be its title? And what can we expect from it compared to previous releases?

DF: Yes, that’s true. After 3 years of working with this album, it’s finally done. The title is: ‘Sic Semper Tyrannis’ and it holds 12 tracks. Mostly our lyrics is about War, and in that sence nothing has changed from its predesessor; World War III. But this time we have brought more to the table, by adding an Orwellian Police-State theme to it.

MR: Thinking back at your career with Deadflesh, do any memories or experiences stick out as particularly memorable, something you remember clearly to this day?

DF: When looking back over the last couple of decades with Deadflesh, it’s somehow funny that nothing really sticks out as being a peak in history. I think it’s a result you’ll get when you confine yourself to a rehearsal room, like we did. If i have to mention something, it must be when we have released our albums.

MR: Last year you added a new guitarist to you line-up, by the name of Sune Borren. How do you feel that has influenced the overall feel of the band?

DF: Sune’s arrival has provoked us to drop our “sleep-mode”. He has literally dragged our asses out of the rehearsal room, by setting up gigs for us. In that way he has influenced Deadflesh to become a functional band that hits the road to defend its music.

MR: As a small easter egg for our readers, could you share with us what your favourite Deadflesh track is and why?

DF: Wow, that was a difficult one. Basically i enjoy all our tracks, because they are all Deadflesh babies. But ‘Trenches of Slaughter’ has to be mentioned. From its birth, it has always been on our set-list, been able to capture and harvest great responses from the crowd. From the new album, my favourite tracks are; ‘Omega-Hammer’ and ‘Iron Mountain’. I love to play ’em and they also work really well in live-situations.

MR: Given the chance to either headline a tour across Europe or as warm-up for other bands on same tour, what bands do you see as being an ideal match for you to tour with?

DF: I really don’t think that we are ready to headline a tour across Europe yet. We simply doesn’t have enough experience to do that. But as a support, i think we would be a perfect match to a band like Bolt Thrower. By listening to our music, it is no secret that one of our all-time-favourite band is Bolt Thrower. Unfortunately that seems impossible now. In reality, we would love to play support to any band.

DF: Thank you so much for showing interest in Deadflesh, we really appreciate it. And “thank you” to your readers, for reading this interview. If you want to, you can follow us at: www.deadflesh.eu or on Facebook. Take care and Support your local underground Death Metal bands. Cheers.