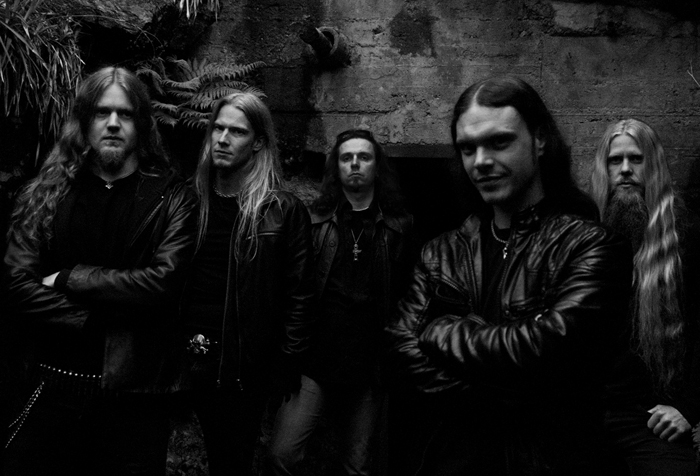 Sulphur is a Norwegian Black Metal band, who deciced to open up their minds and their instruments to the glories and wonders that Death Metal have to offer and infuse it into their already existing matrix. This has resulted in three full-length albums over the last ten years (give or take), the newest of which being entitled Omens Of Doom. Two of the bands members, Øyvind Madsen (guitarist, keyboard player and programmer) and Thomas Skinlo Høyven (vocalist) have kindly agreed to present the band and this, their most recent release to us here at Metal Revolution.

MR: First of all, thank you for taking the time to participate in this interview. And in order to start at the beginning, i have discovered that Sulphur was originally founded under the name Taakeriket, but was changed in 1999. What was the reason behind this? And why was the name Sulphur chosen instead?

Øyvind: The main reason that we changed the name to Sulphur was that the band was progressing musically in a different direction. Under the Taakeriket name the style was typical 90´s ice cold black metal. We got tired of just playing straight forward black metal and wanted to spice things up a bit with progressive elements and some death metal. I think the music becomes more interesting if you can include a great variation of different styles, but you also need to keep focus to prevent total chaos as well when you mix so many different styles. I think that Sulphur describes the music that we play a lot better than Taakeriket so a change was absolutely needed.

MR: Your third record, Omens of Doom, was released earlier this year to great critical acclaim. Hopefully that makes you proud?

Øyvind: Of course, very proud indeed. Right now we are feeling very inspired and we have already started the work on the next album, so hopefully it won´t take 6 years to complete the next album.

Thomas: It is amazing to release an album which brings this much great response! We love to make music, even though it takes time, but then it is great to see that people like the result. I am very proud, especially of the band, but also the producer and the cover artist for what we accomplished together with this release!

MR: You have added a track in your native Norwegian on your newest release, which appears to be a first. Is there any particular reason for this?

Thomas: We have in fact released one track in Norwegian on all of our releases except our first demo, of which I wasn’t a part of, so it has become a tradition of sorts. At first every lyrics was written in English but after some discussion within the band we figured out that it would be great to keep it up as we had done with the last releases. “Alt Svartner” was first written as “All Blackens” which means pretty much the same thing, but the lyrics got a fiercer feeling to it when it was translated and a bit rewritten in Norwegian. I am very happy that we decided upon releasing it in Norwegian as I am a great fan of Norwegian Black Metal sung in Norwegian myself.

MR: How would you, in your own words, describe your music and the concept behind Omens of Doom? And is there an underlying concept or connection to your previous releases?

Øyvind: Musically there is no concept behind the album. Over the years I think our music has become at bit more progressive and the structure of each song has a better fundament lying under it. If you compare the first album with Omens of Doom I think the album has a much better structure and have more of a thin red line to it. We have developed much as a band and learned many things when it comes to songwriting over the years, and I feel that with Omens of Doom we have really found ourselves musically. We are constantly trying to move forward musically and I think that the next album will show that always try to bring new and interesting elements to the black and death metal genre.

Thomas: As for the lyrics “Omens of Doom” is not a concept album, but there are a theme running through the whole album. It is as the album title describes, different omens of doom. I chose to concentrate on the not so unfamiliar apocalyptic theme on this album. The devastating effects of natural disasters as volcanos and great storms when mother earth tries to get rid of us all. Other lyrics are about nuclear wars and the aftermath where humans and the earth suffer the deadly and unfertile landscapes, causing plagues and famines to rule the lands. In differs to the earlier releases where the lyrics was more anti religious I have this time focused on the madness in humans and the way we treat our earth and the people around us which, by looking at the news, most likely will be our own downfall.

MR: Sulphur has been around for quite a while. Do you have any particularly good experiences or memories from your time in the band?

Øyvind: Yes, we have been around for quite some time now and there has been a lot of different members through the years coming and going, so I will try to concentrate on the current line up (2006-present). I remember after we had recorded our second demo tape we made loads of promo kits and sent them around the world to different record labels hoping to get signed. Then one afternoon a got a call from an abroad number and it turned out to be Osmose Productions wanted to sign the band, that was a big and important happening in the bands history. We were really exited about this and we looked forward to release our very first album Cursed Madness. We have not played very many live shows trough the years, but we did a very memorable tour together with Taake, Vulture Industries and Helheim after the release of the Thorns in Existence album which was a great experience.

MR: Even though you have just released a new record, do you have any more releases planned in the near future?

Øyvind: We are currently working on new material for the next album and so far two songs are finished composed. If it will be in the near future it´s not easy to say, but we will try not to use 6 years before the next album is released.

Thomas: Yes, hopefully it wont take 6 years this time, but I am not looking forwards to starting with those lyrics. It is a pain in the ass to figure out a theme and get the writing started;)

MR: Are you planning to tour in order to promote the album?

Øyvind: We are currently working on that bit, it´s a slow and on going process. We are looking for possibilities to join other bands on tour, so everyone that might be interested in having us on tour with them just let us know. So far we have two shows confirmed together with Vulture Industries, the first one at the Phantoms of Pilsen festival in the Czech republic and one gig at Festung Bitterfeld in Germany.

MR: Overall I remember being very impressed by Omens of Doom, the track ”Rise of the Mushroom Clouds” being my favorite. Which track do you personally prefer of all the tracks that Sulphur has created?

Øyvind: I think that is a thing that changes after each album release, but right now it is “The Force of our Fall” for me personally and I also think that it´s not easy to choose only one track, so I will also include some old track like “True Father of Lies” and “Throne of Illusion”.

Thomas: That is a difficult question indeed. I am very fond of “Into Nothingness” and “Luna Noctiluca” on our previous album and on the new one I think “The Devils Pyre”, “Alt Svartner” and “Rise of the Mushroom Clouds” changes places in the top every time I listen to the new album.

Thomas: Yes. First of all, I would like to thank Metal-Revolution for an amazing review! Then I would encourage all your readers to listen to our new album and use your time with it. It is not an easy listening and will need time to revile its structure. If you do give it time I am sure you will get an album to listen to for a long time with music that will grow every time you give it a new spin. Cheers and thank you very much!